Bryan Rojas Pinedo and Lidia Selles Bataller of Lancaster House had a day out cruising Lancaster Canal. They shared the highlights of the day and some of the interesting history that they discovered along the way. 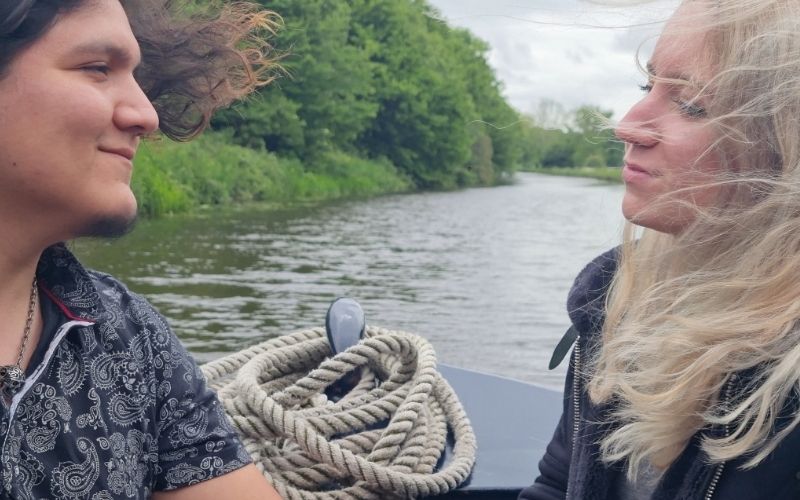 Bryan was born in Peru but spent the majority of his life in Spain. In 2019, Bryan moved to the UK and started his work experience at Low Wood Bay as Kitchen Porter. After 5 months, Bryan was offered a job at Lancaster House. Three promotions later, he is now Chef de Partie. Lidia met Bryan in high school, but it wasn't until the end of 2020 that she moved to the UK and now works at Sandpiper Leisure Club.

This is a great day out for guests staying at Lancaster House or The Midland and can be booked for you at Reception. It was also a good opportunity for Bryan and Lidia to discover a bit more about the county in which they now live and work.

All Aboard a Lancashire Canal Cruise

All aboard The Kingfisher, the ‘jewel in the crown’ of Kingfisher Cruises. This magnificent canal barge comfortably holds up to 60 passengers. The lovely wooden interior is complemented by its very own bar area. There’s an open deck at the front, perfect for sunny day cruising. 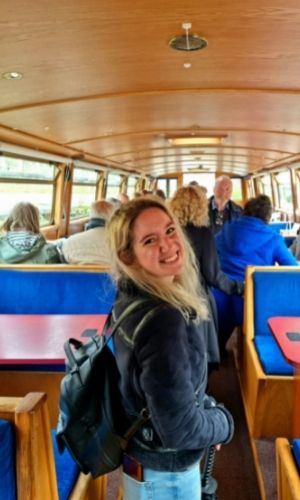 The day was windy and a bit overcast but we were excited to get started on what is a highly rated Lancashire attraction. We were booked on the12.30 cruise which included fish & chips – an added bonus! We joined the cruise near Lancaster city centre, at Aldcliffe Road. The crew was so attentive with all the passengers. They gave us a safety talk and then explained a bit about the trip. There was also information on the canal and it’s history on each table. 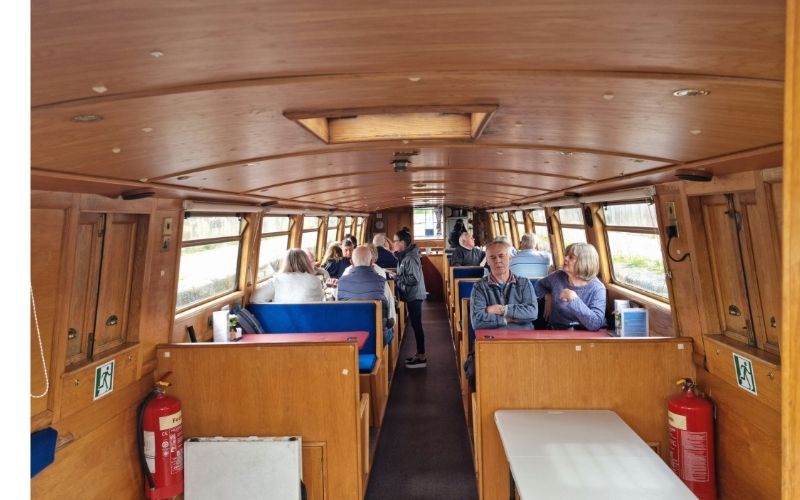 There has been much work done to rejuvenate the Lancaster canal towpath where there was once no fewer than eight textile mills. We noted that it would also be interesting to walk along a stretch of the restored towpath another day. 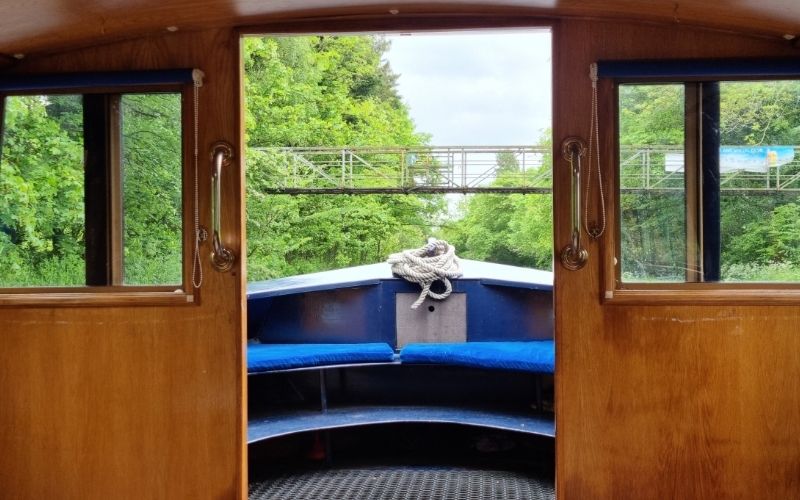 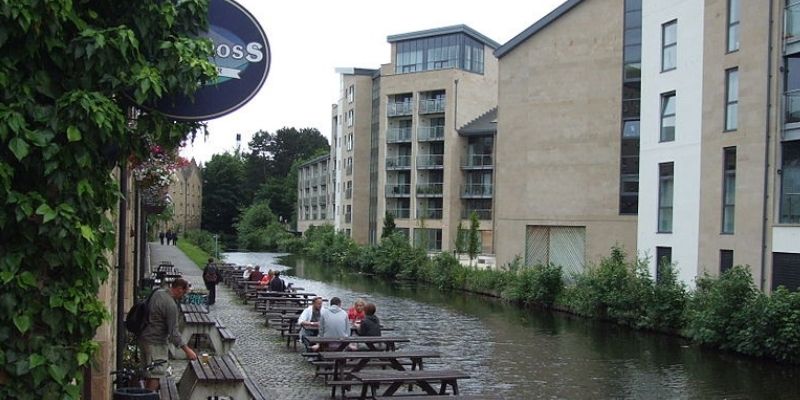 The first part of the cruise is through the old mill works industrial part of the city. There was good reason for building the mills along the canal as, back in the early 19th century, water transport was the cheapest way of transporting the coal used to steam-power the mills from south of the county. Indeed, the canal was known as the Black and White Canal as many of the boats transported coal, and many carried limestone for building work.

The cruise takes you past the three remaining refurbished mills that are still in existence. Storey Brothers who owned most of the mills stock, founded their company in 1849. They were leading manufacturers of table baize and linseed oil leather cloth that mimicked real leather. The mills were also the first place to make Anaglypta paper. The brothers were responsible for bringing vast wealth and prosperity to the city of Lancaster and became respected for their good works as local philanthropists.

The cruise gave us a great view of the city landscape, and particularly the imposing spire of the cathedral as we passed by.

The cityscape is soon replaced by leafy suburbia and the gentler pace of country life. 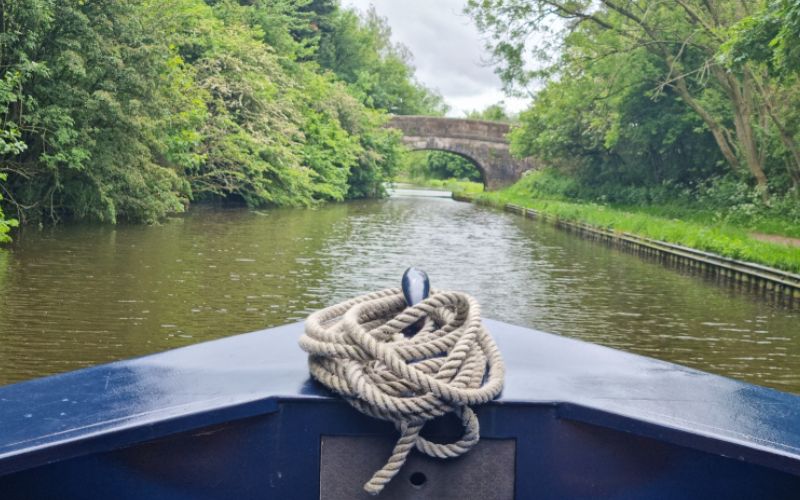 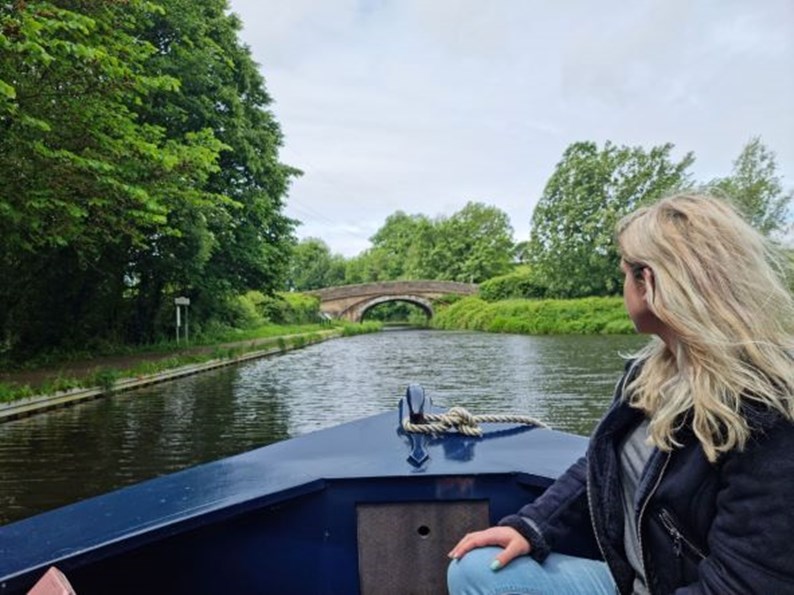 We arrive at Lune Aqueduct and you cannot be anything but impressed by the masterpiece of civil engineering it represents. It towers 16 metres above the River Lune and carries the canal over the river. The crew gave us the chance to leave the boat to enjoy the views. Looking down was a dizzying experience, but the views across Lancashire’s Lune Valley and towards Yorkshire’s flat topped Ingleborough mountain were delightful. 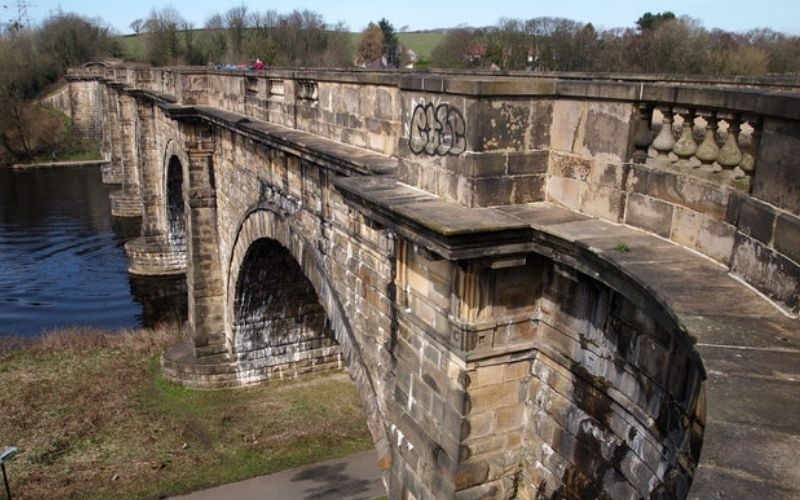 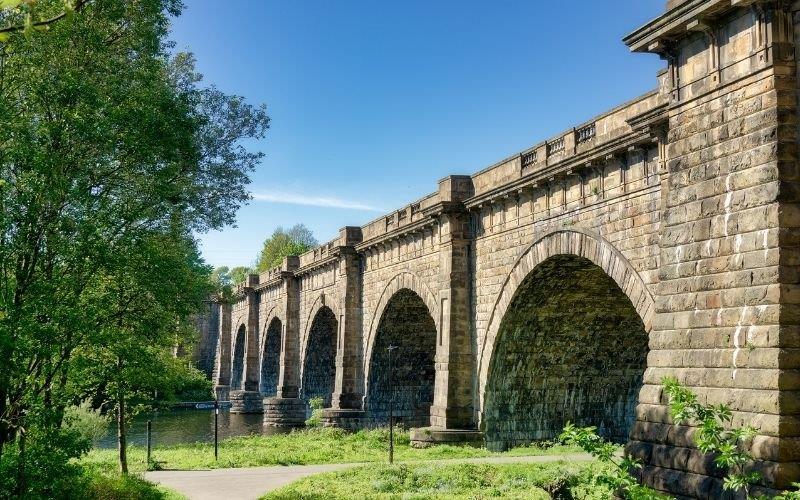 The Grade I structure was designed in 1797 by Scottish civil engineer, John Rennie, and took three years to build. There are five 21 metre semi-circular arches. The design includes special volcanic powder that was imported and mixed with cement to allow the concrete to set under water. Also preserved under water are the 60 tree trunks that were used to support the five stone arches.

Again we noted that there was lots of other activities around the aqueduct, including walks and cycle ways, that could form another very pleasant day out.

A Great Lancashire Day Out

What a great way to spend a day exploring Lancashire. A big thank you to Kingfisher Cruises and the team that made it such a great day. We enjoyed the sights of the city, the countryside and the magnificent Lune Aqueduct. We also learned about the history of the canal, and enjoyed a very tasty lunch of fish and chips. Highly recommended. Check out other things to do from Lancaster House this summer.