In Daniel Defoe’s 1722 ‘A Tour Through the Whole Island of Great Britain’, he described the hills of The Lake District as “high and formidable” and went on to say that the area was “all barren and wild, of no use or advantage either to man or beast”. We’ve come a long way since then …

The early 19th Century poets saw things very differently and it was William Wordsworth that described the mountains as “towering above each other, or lifting themselves in ridges like the waves of a tumultuous sea, and in the beauty and variety of their surfaces and colours, they are surpassed by none".

He went on to say that the Lake District was

In case we take National Park status for granted, here’s a little timeline of how

James Bryce MP proposed the first Freedom to Roam Bill.  It failed to be adopted, sparked a 100 year campaign by the Ramblers’ Association to give the general public the right to access public and privately owned land for recreation and exercise.

As a response to the effects of industrialisation in the towns and cities, there was a growing appreciation of the great outdoors and the benefit of exercise. This led to conflict between public interest groups and landowners, many of whom strongly defended their property rights. A protest organised by the Young Communist League of Manchester rallied a group of ramblers to trespass Kinder Scout in Derbyshire. There were scuffles with gamekeepers and five of the protagonists were jailed and served jail sentences. Later, this was claimed to be the most effective act of civil disobedience in UK history.

Leisure activity enthusiasts and nature conservationists lobby government to put in place measures to protect the landscape and allow greater access to the countryside. 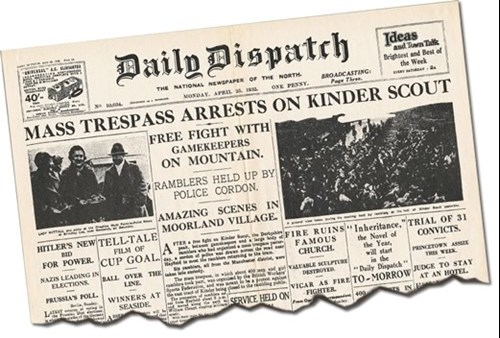 The National Parks and Access to the Countryside Act created.

The Act provided the framework for the creation of National Parks and gave public rights of way and access to open land.

Minister for Town and Country Planning, Lewis Silken, said it was ‘the most exciting Act of Post-war parliament.

Starting with the Peak District in 1951, the first 10 national parks were designated. In the next ten years the Lake District, Snowdonia, Dartmoor, Pembrokeshire Coast, North York Moors, Yorkshire Dales, Exmoor, Northumberland and Brecon Beacons National Parks have been established. Council for National Parks established – a charity which continues to campaign for protection and enhancements of National Park.

The Lake District is an evolving landscape that has changed over time and will continue to do so. Improving landscape biodiversity and looking after our cultural heritage underpin the Partnership’s management plan which sets out how, together, we will look after the National Park as a World Heritage Site for everyone to enjoy

English Lakes Hotels, Resorts and Venues will continue to celebrate the hard fought-for freedom to roam our beautiful Lake District landscape. We offer a warm welcome to visitors from near and far at our Lake District Hotels.