If we had to sum up Andy and Sukanya's summer wedding at Low Wood Bay in one phrase it would have to be 'vibrant and brilliantly colourful'. Our wedding team enjoyed every moment of the preparations leading up to the big day and are delighted that the happy couple have shared precious memories of how their love story began and how they went about creating their unique and stunning wedding day. 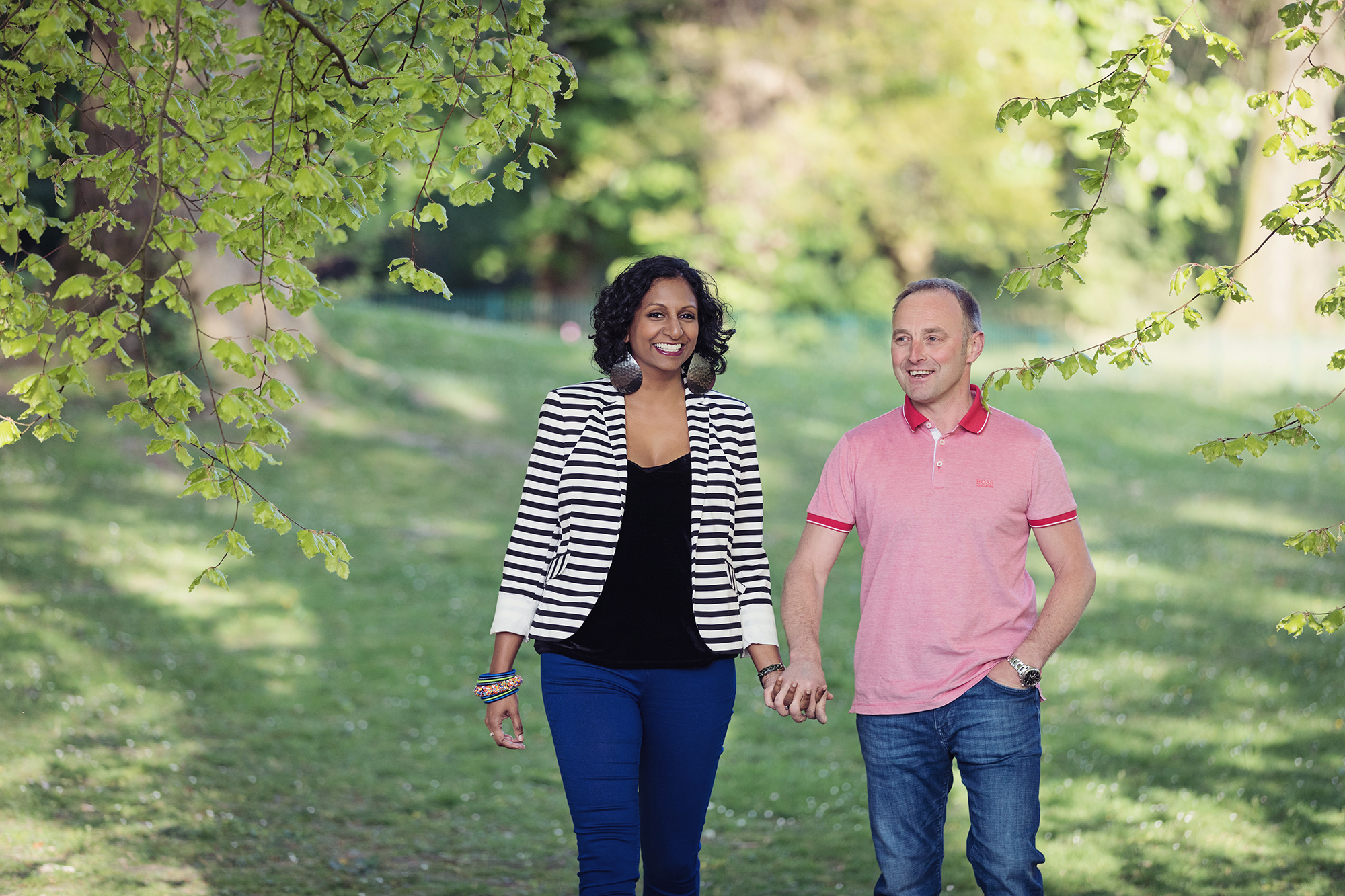 The power of the internet!

Andy had joined a rather prestigious online dating site, with the help of his IT savvy friends. Following a month of absolutely no matches, he had planned to cancel his subscription. Luckily, Andy missed his cancellation window and it was in this second month that Sukanya had signed up for the same dating site.

Keen to make the most of this unwanted second month of subscription, Andy was quick to send contact, by way of a virtual 'smile' to Sukanya. Sukanya’s captivating profile blurb and picture caught Andy’s attention (obviously), but mostly, it was her LAXX postcode that really dazzled this new age romantic!

Following a series of emails, the pair agreed to meet up. The big date was to be the infamous Appleby Horse fair, much to the combined horror and amusement of Andy’s friends. They decided a pre-horse fair date meet would be sensible, so rendezvoused at The Swan in Newby Bridge a few days earlier. 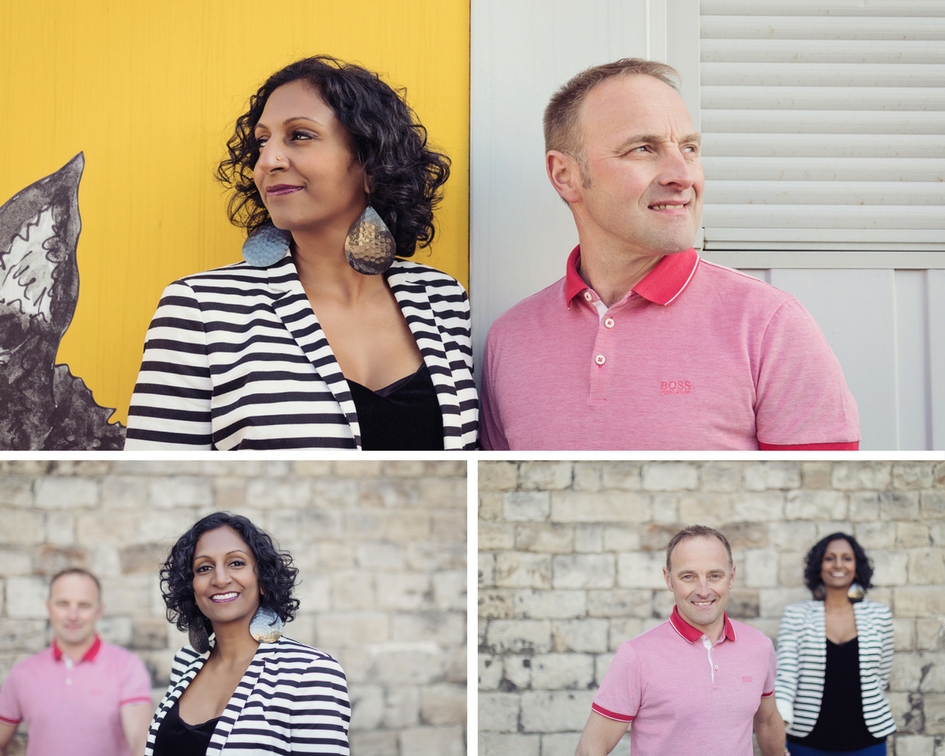 Ullswater ripples of 'I Do'

We were due to head off on our annual pilgrimage to Center Parcs in Penrith for our long weekend at the end of Feb 2016. Unbeknown to Sukanya, the journey to Center Parcs, Ullswater to be precise was to be the location of the proposal.

Andy had spent a couple of weeks planning this moment. The when and where were sorted, the how was proving much more problematic. He spent the week leading up to the trip looking rather pale and anxious. He was caught staring vacantly into the distance a few times, his top lip shimmering with beads of sweat.

On the approach to Ullswater, Andy suggested that they stop to take photos on the lake shore. Sukanya did as was requested and walked across to the lake shore. When she turned around to look back at Andy, he was on his knee. 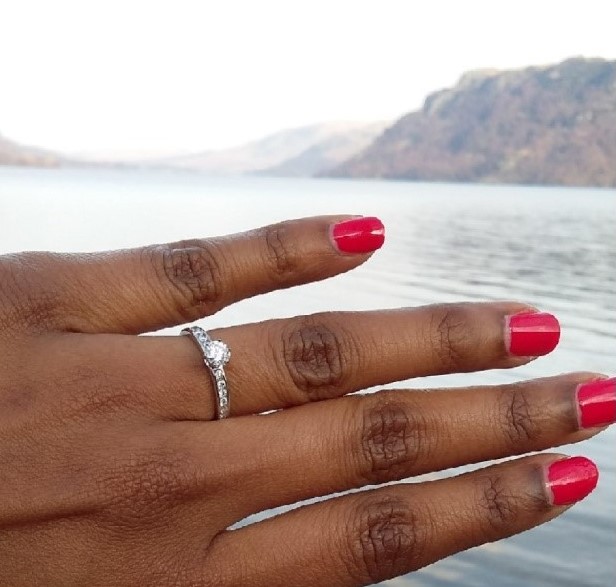 The proposal was completely unexpected, very thoughtful, and romantic!

Andy and Sukanya live near Windermere and were keen to keep the wedding in the Lake District. There really is little competition for the natural beauty right here on our doorstep. They also knew that they were planning to invite many guests. Key to our venue choice would be beautiful surroundings and the ability to manage our guest numbers. 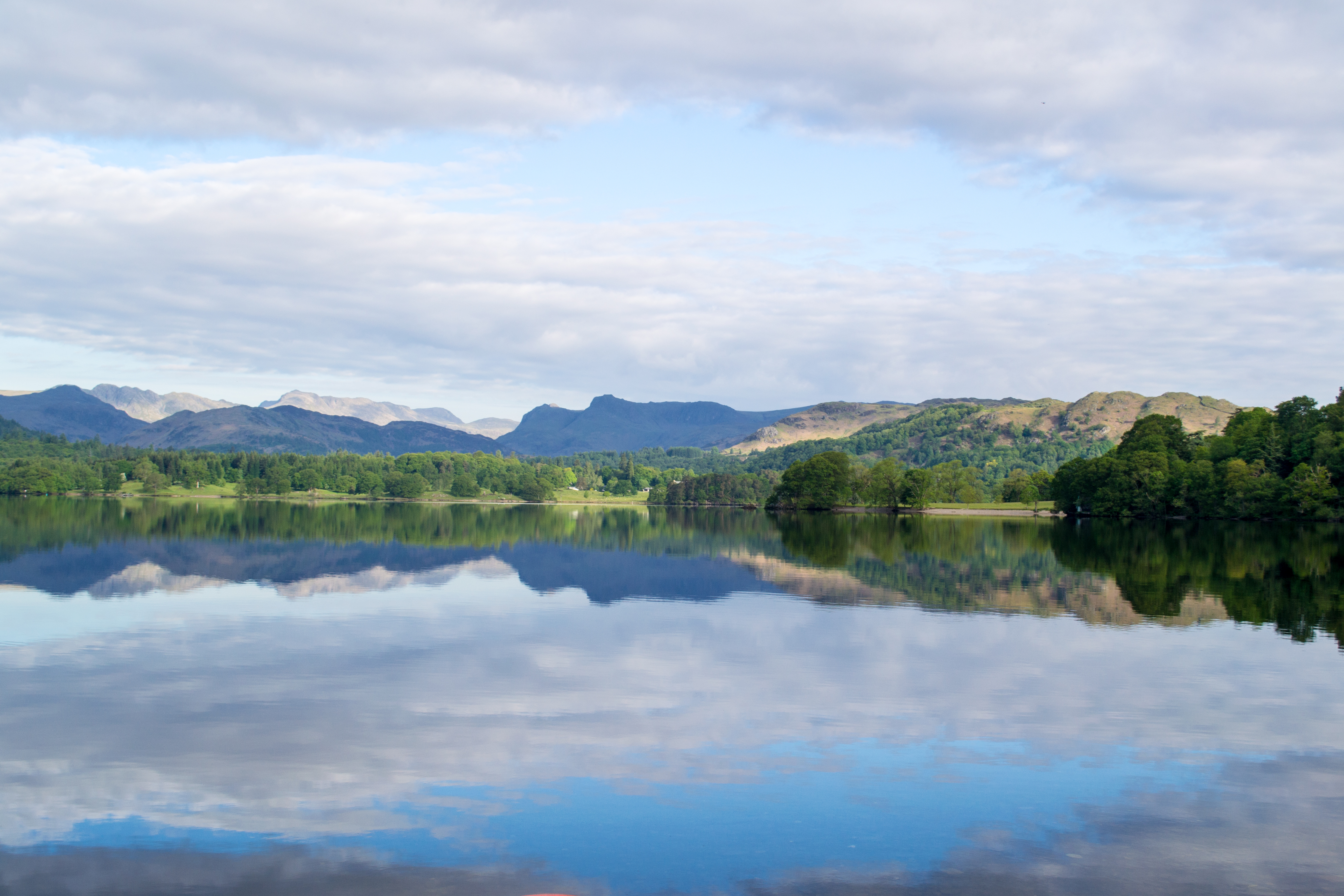 Having discussed their needs with friends and family, quite a few people suggested checking out the Low Wood Bay Hotel. Andy & Sukanya knew the location was stunning. They met with the Wedding team, who were great; very friendly and helpful. Their approach put us at ease immediately. Andy & Sukanya talked through all their needs and the team were very confident and reassuring that they would have no trouble with helping to plan their big day. 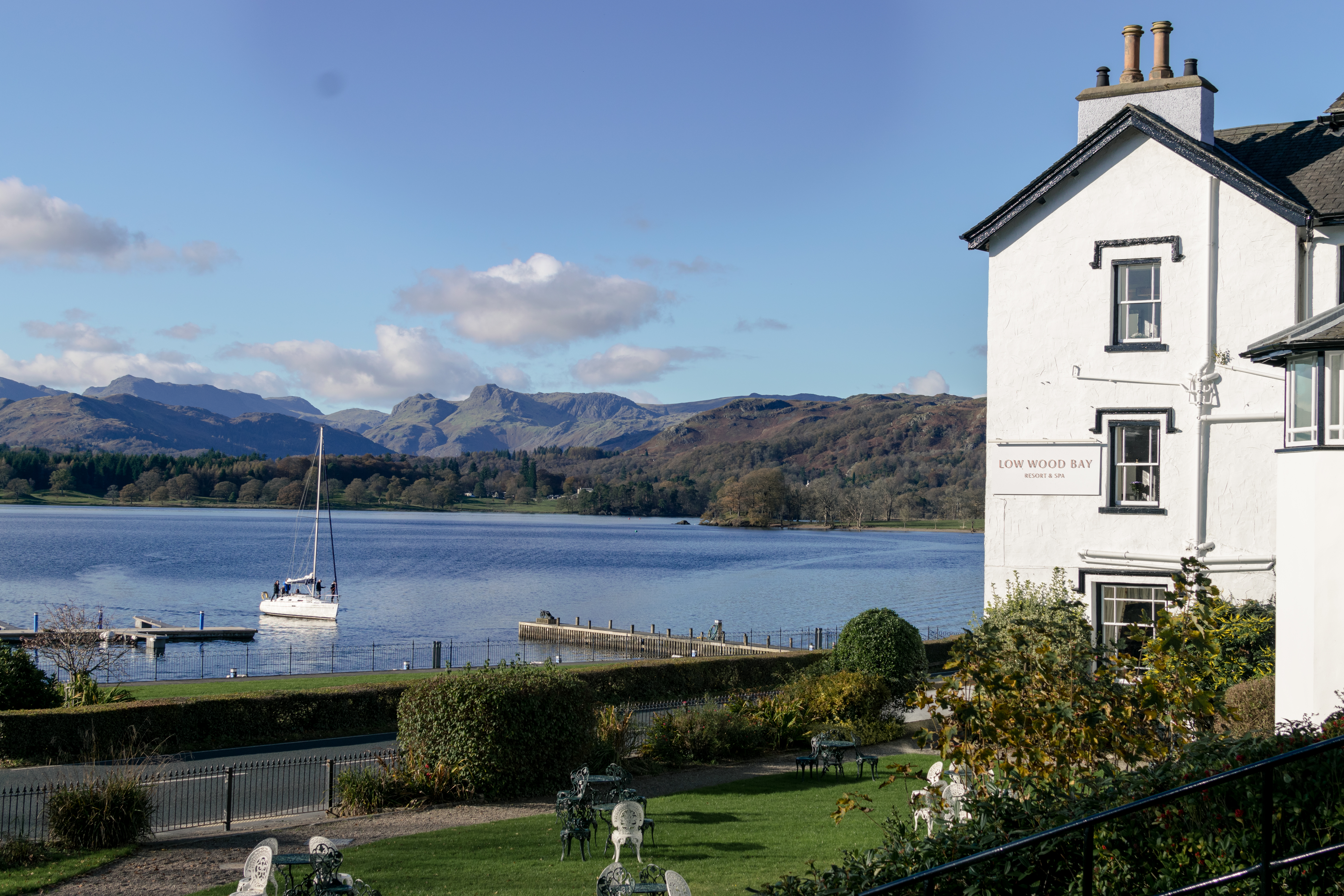 Andy & Sukanya decided very quickly after this meeting that this was the venue for their wedding. They were pleased to have acted quickly as there were only two Saturday dates available for summer of 2017. 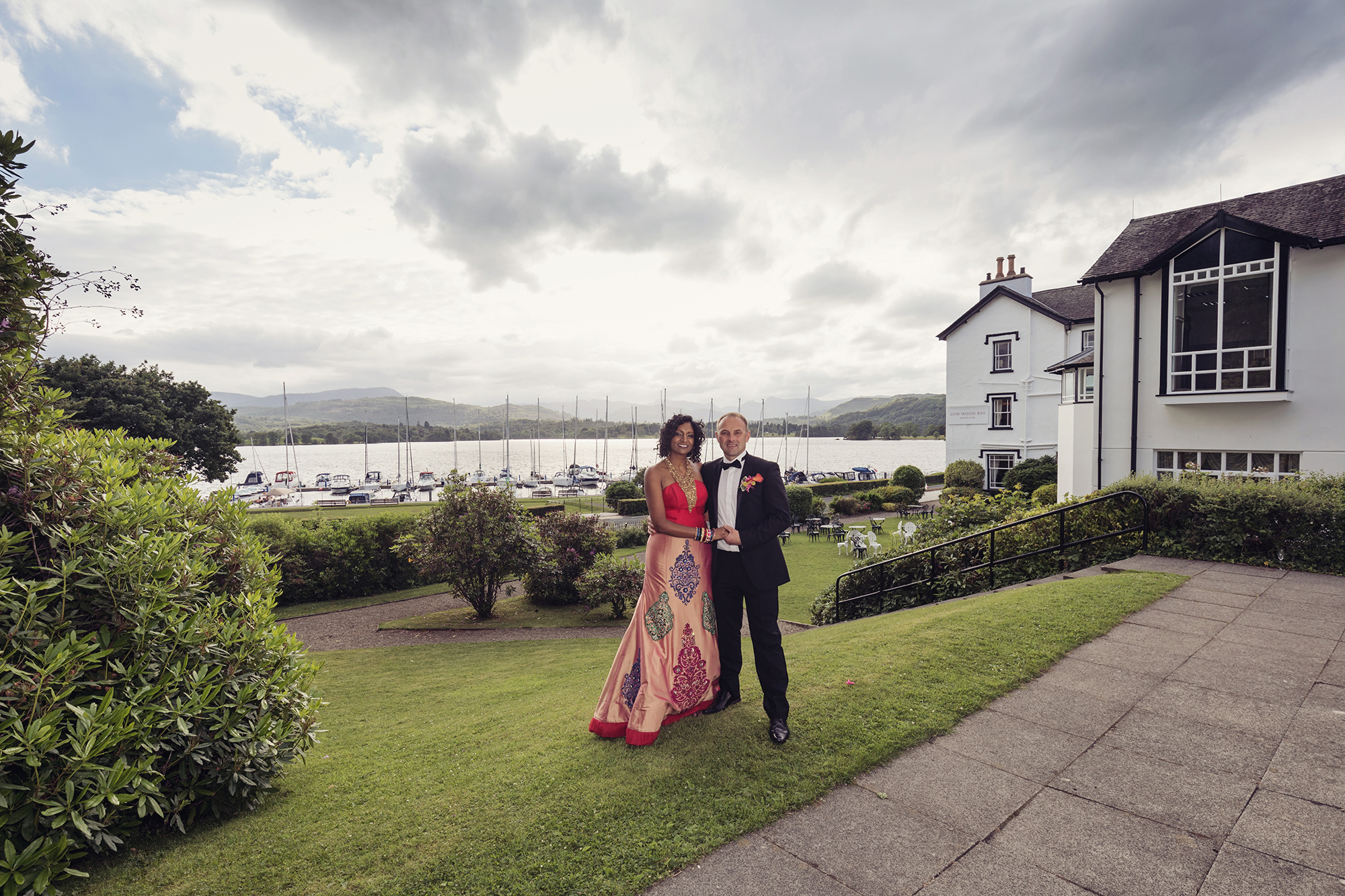 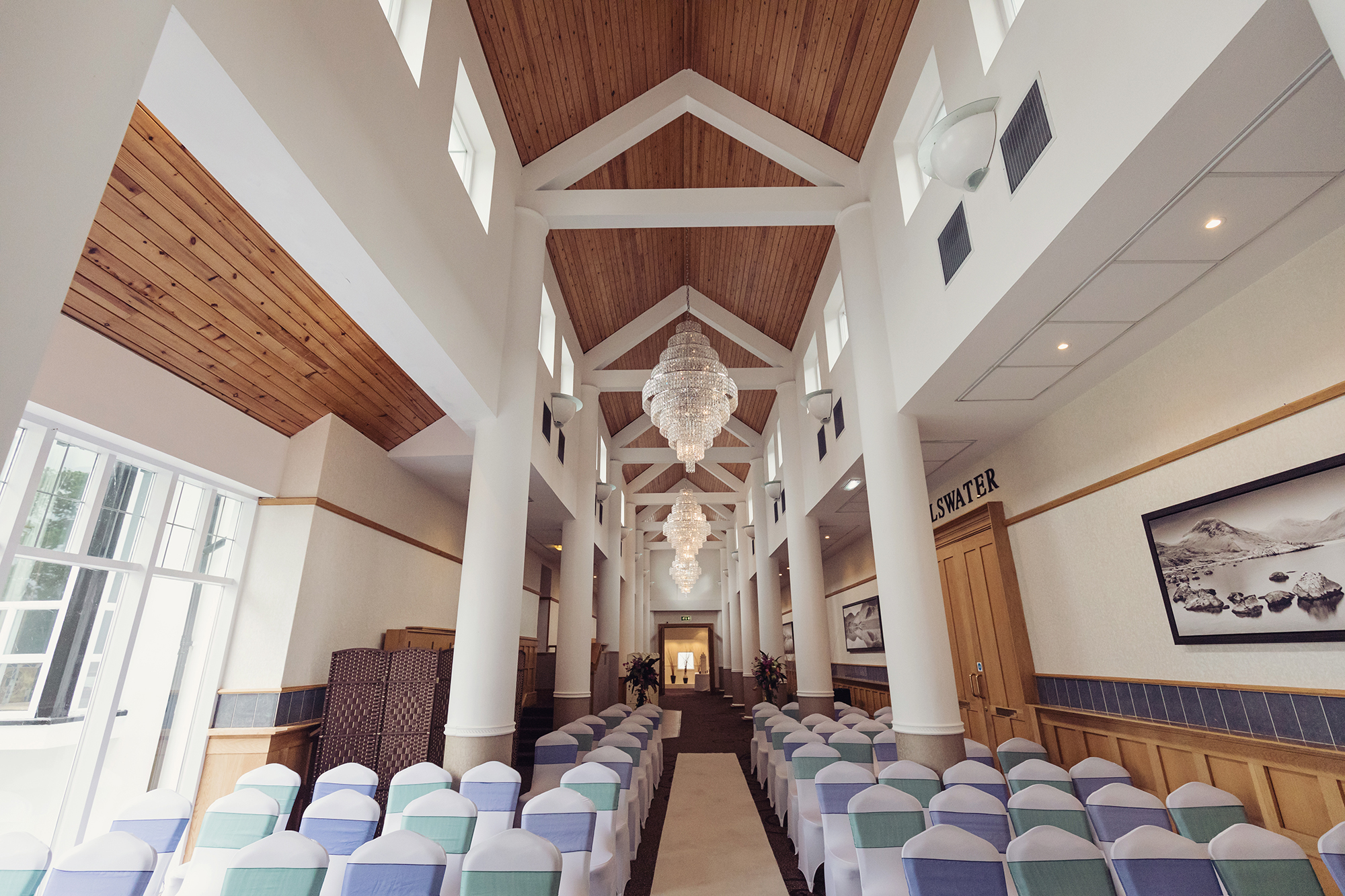 Andy & Sukanya decided that the wedding would be Black Tie and Glamorous. Andy wore a winged collar shirt, a black bow tie and his patent black formal shoes, and looked very handsome and felt great all day. 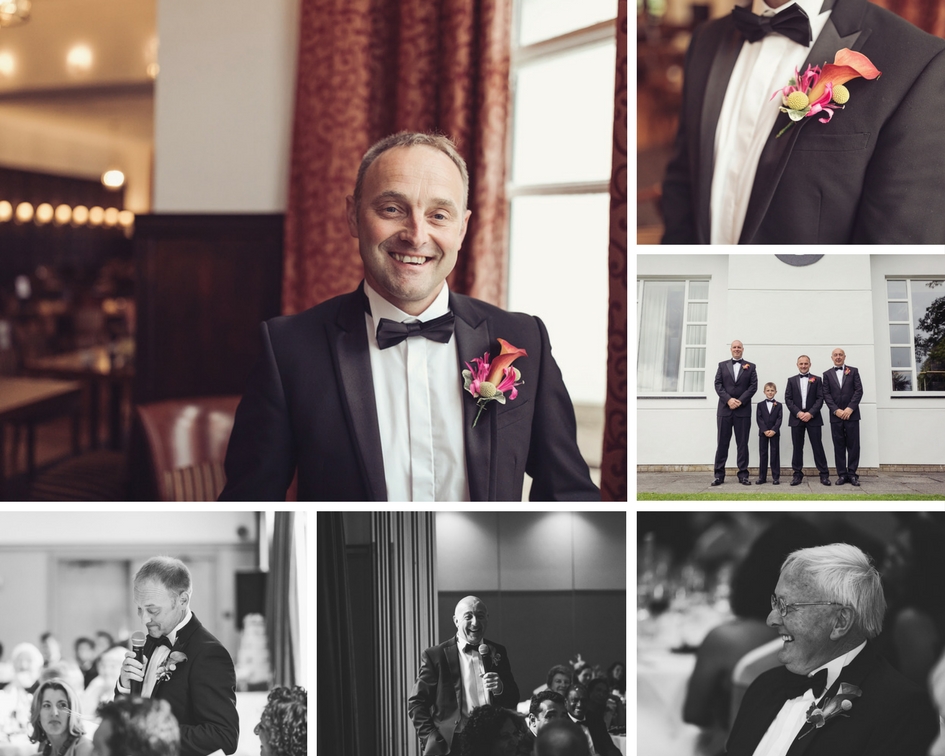 Sukanya’s outfit was found following a lot of research online. It was designed by Mona Vora who specialises in modern Indian Bridal wear. 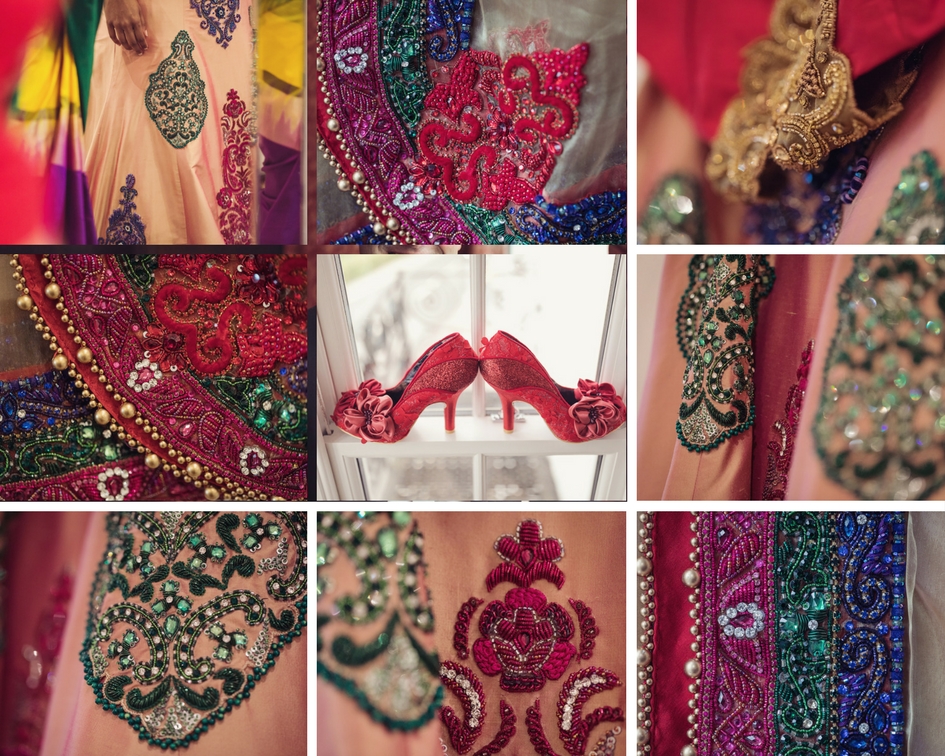 Each piece is handmade and access to the garments and designer are by appointment only. Mona’s team are exceptionally professional. Each appointment took as long as was needed and there was never a rush to complete the appointments. The outfit was brilliantly colourful and influenced the colours and theme for the wedding. 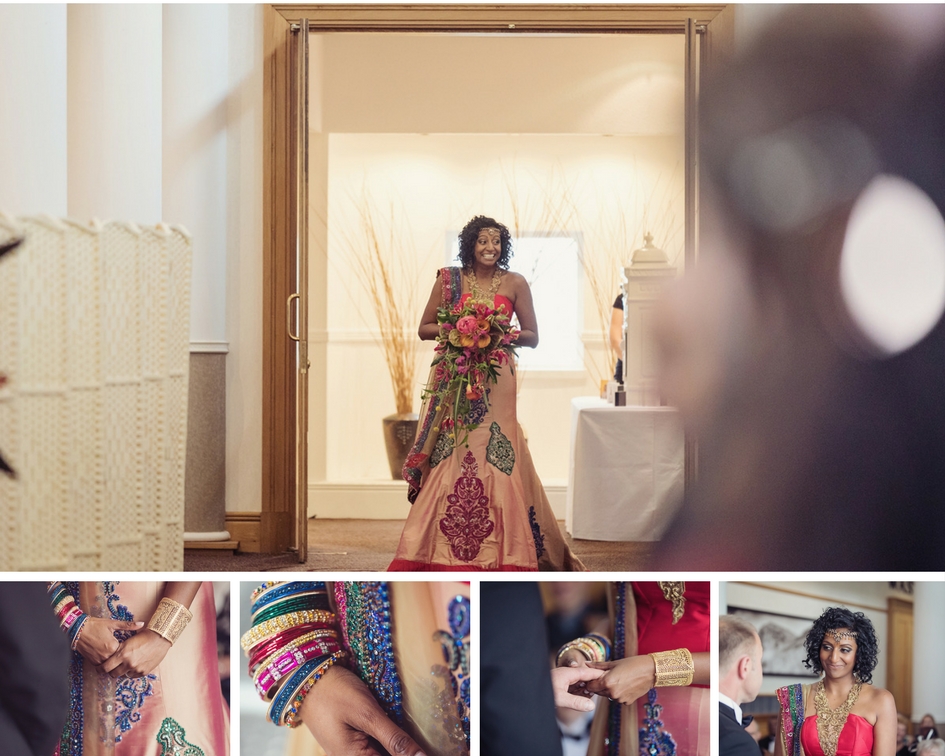 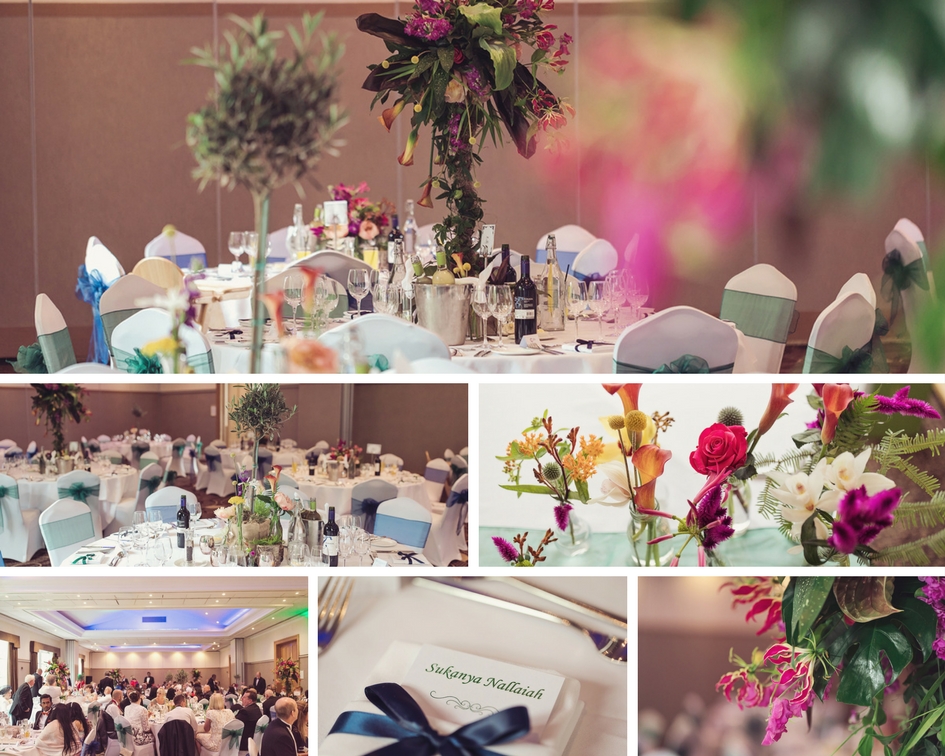 Ambience Venue Styling expertly styled the venue, and when combined with the beautiful flower centrepieces, the room came alive. There was so much to look at and savour, it was a joy.

Andy & Sukanya had lots of fun selecting the wedding breakfast menu. They knew it would be a long day, as the wedding ceremony started at 11 am, so they planned a substantial meal. They chose a main course of Lamb Shank. It was absolutely delicious; the lamb just fell off the bone. Many of their guests mentioned how great all the food was, particularly the lamb! The cheesecake dessert was creamy, crunchy, luxurious and felt gloriously indulgent. 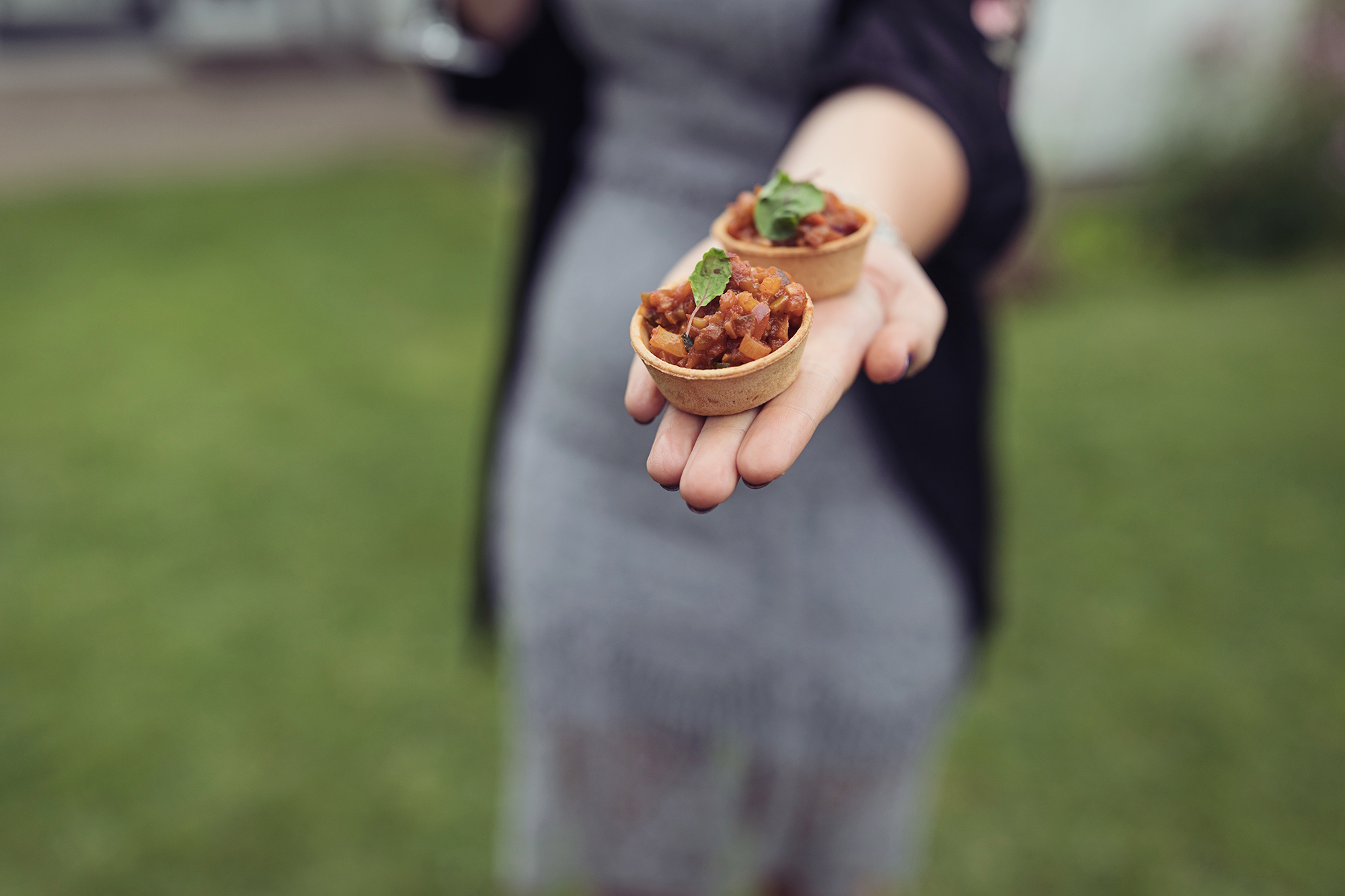 The whole menu was Gluten Free, from Canapés through to the evening meal. This meant that all the guests could feel able to relax and enjoy every aspect of the wedding, without feeling left out. 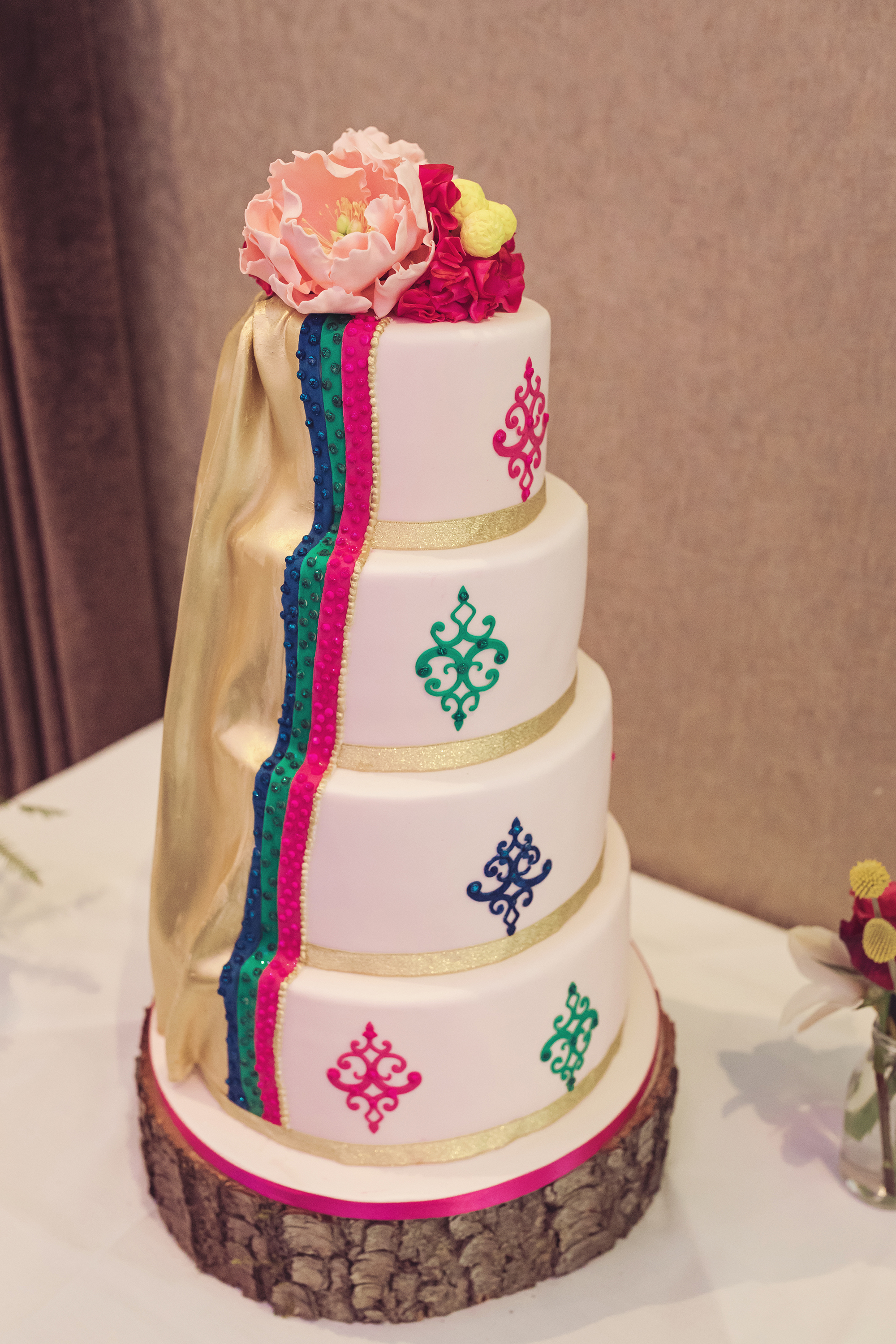 The wedding cake was made by Sugar Ruffles and the design based on Sukanya’s outfit. They had a 4-tier cake, with one tier being gluten free. When they saw the cake, prior to the wedding breakfast, Andy & Sukanya were incredibly impressed at the detail of the sugar work and the way in which the Bridal outfit was so perfectly captured.

Wedding favours were something the couple really struggled with choosing. They thought of many different ideas, such as, mini Kendal mint cake liqueurs, novelty games, etc. However, they could not settle on anything as it felt, to us, as a token that would most likely end up being lost, broken or left behind. 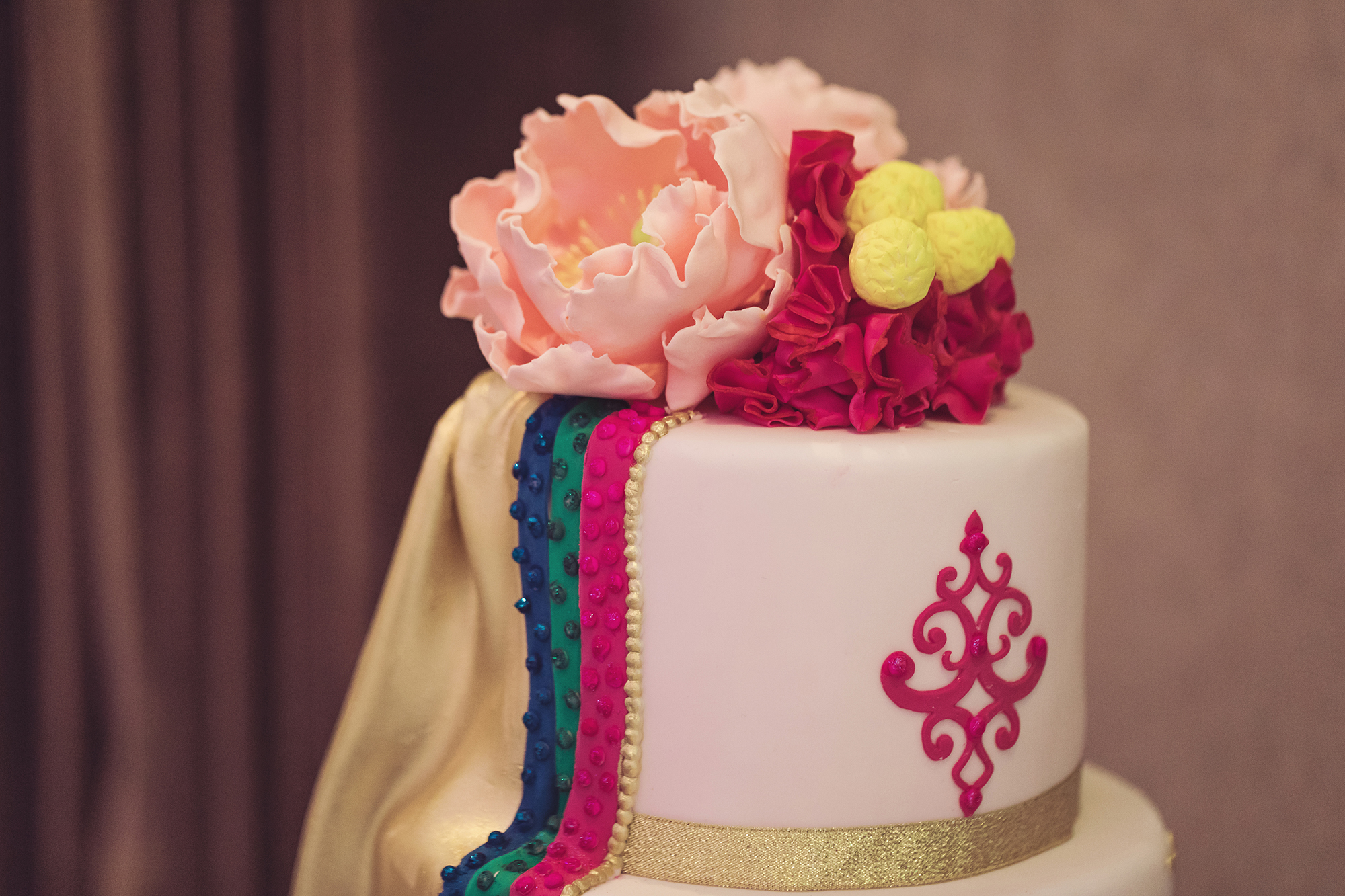 Andy & Sukanya eventually decided on favours and they were really happy with their decision. Instead of buying small favours, they donated the cost of favours to Cancer Research, and in return, received small cards to place at each guests table setting to let them know this is what was done. It felt good to contribute to such a worthy cause.

Whilst planning the wedding, Andy was very concerned about the break between the wedding breakfast and the reception. The couple bounced some ideas around and eventually agreed to let guests have some time to themselves…or so Andy thought.

With the help and discretion of Gemma, Fillipe and Rachel from the Low Wood Bay’s wedding team, Sukanya arranged a surprise casino to fill the time. 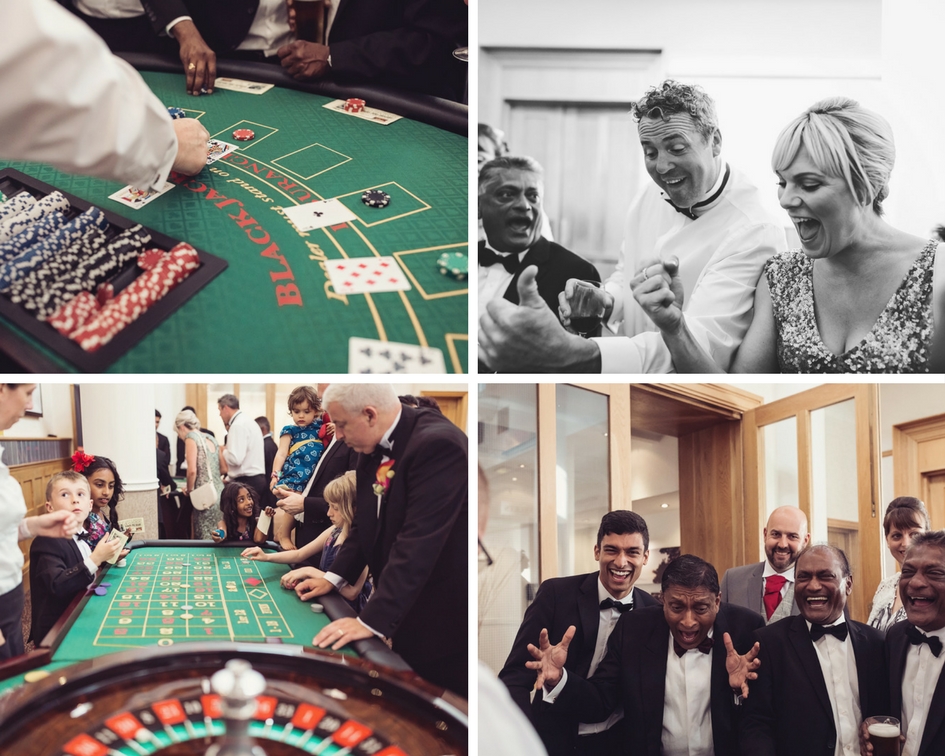 The Low Wood Bay’s wedding team were very professional in the way they managed the surprise, from ensuring the casino costs were hidden from any information Andy would see, to making sure Andy was not aware the casino was being set up during the wedding breakfast.

The casino was provided by Pier Fun Casinos. They were very accommodating of the younger guests and provided excellent entertainment. Andy was very surprised and enjoyed it thoroughly.

James Brown’s I feel good was their choice of song for the all-important first dance. During the time that passed between getting engaged and to suddenly being faced with the first dance, Andy & Sukanya had many fantasies of taking dance lessons, choreographing their own dance with the help of YouTube, to eventually more realistic conversations about 'having a go' in the lounge.

In reality, none of the above happened and they free styled it on the day! It was a lot of fun and exactly how they wanted it to be – fun, care-free and natural. 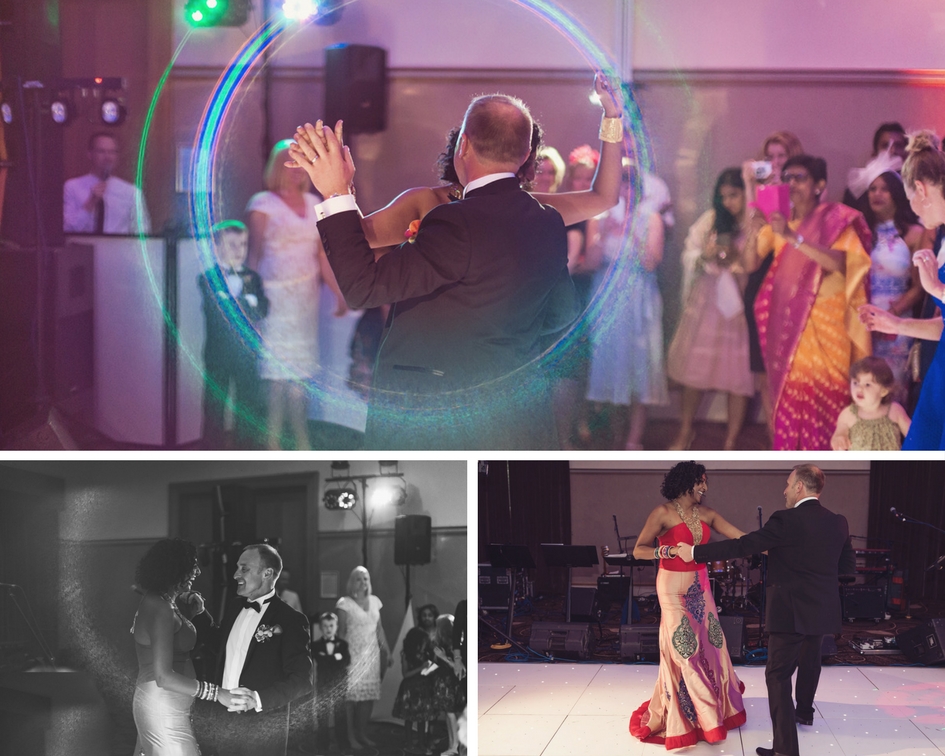 The wedding band, The Soul Train were brilliant! They specialise in Northern Soul, Motown and classic sixties. To have a full 9-piece band was phenomenal; The atmosphere at the reception was electric! 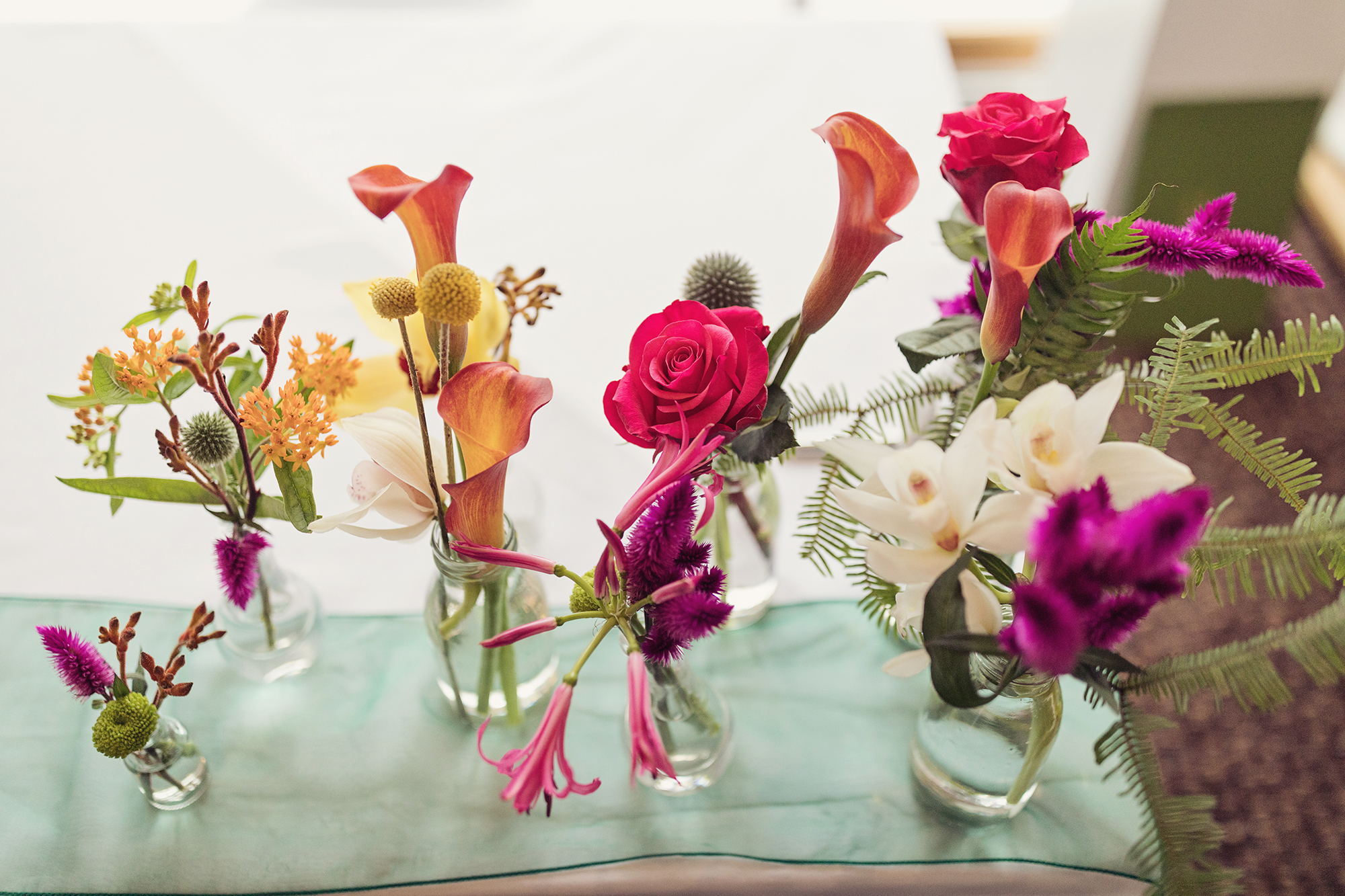 A very big part of Andy & Sukanya’s wedding theme and certainly a very big talking point, even today months after the wedding , were the flowers.

The couple worked with Kevin and his team at Brackens of Bowness. The team had pictures of the Bridal party’s outfits on which to base the colour palette. The resulting collections of flowers were simply stunning. The colours were extremely vibrant, fun, and well thought through. Every receptacle containing flowers were all somewhat different, creating a tantalising feast for the eyes. 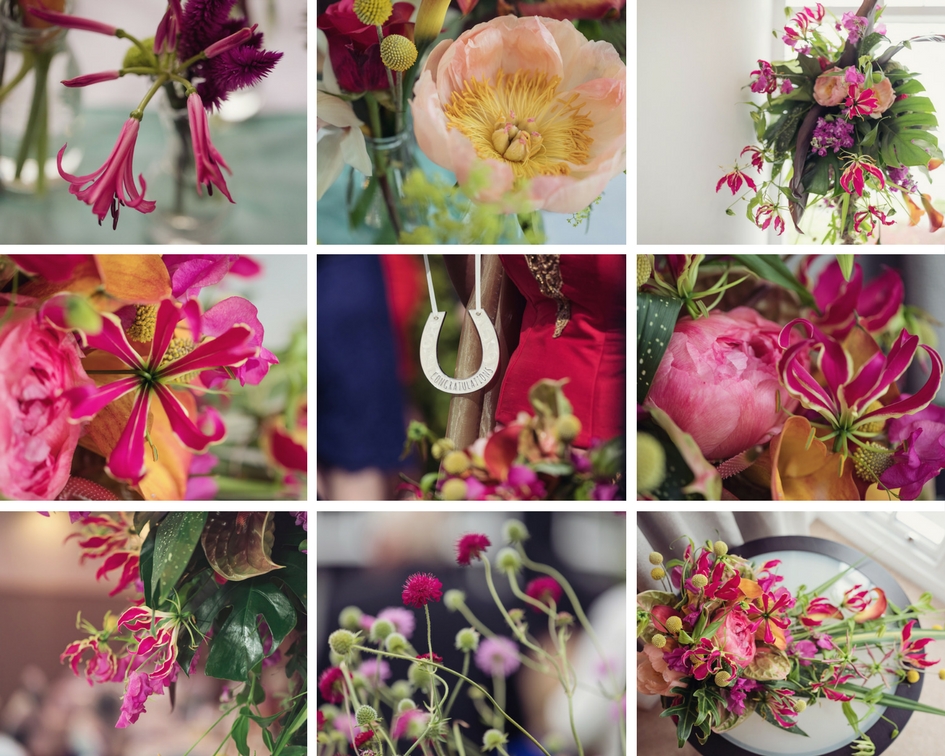 The bridesmaids had corsages rather than bouquets. These were simple, pretty and elegant. They complimented the bridesmaid’s dresses perfectly. 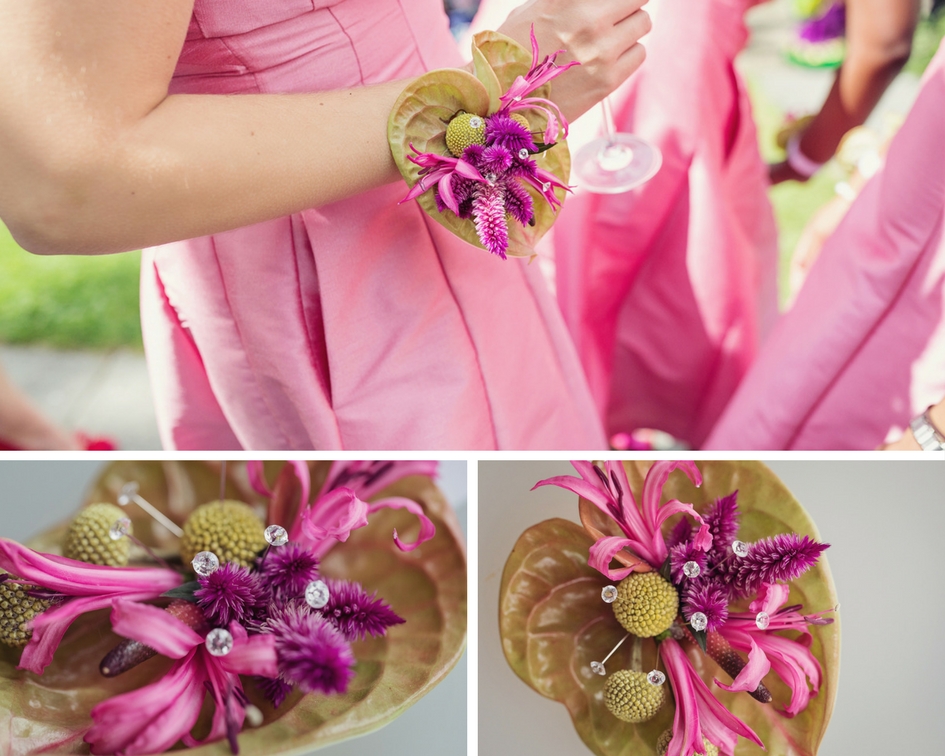 The Bridal bouquet was exquisite. It leaped out from Sukanya’s hands, bursting with colours and such beautifully unusual flowers, screaming “LOOK AT ME”! 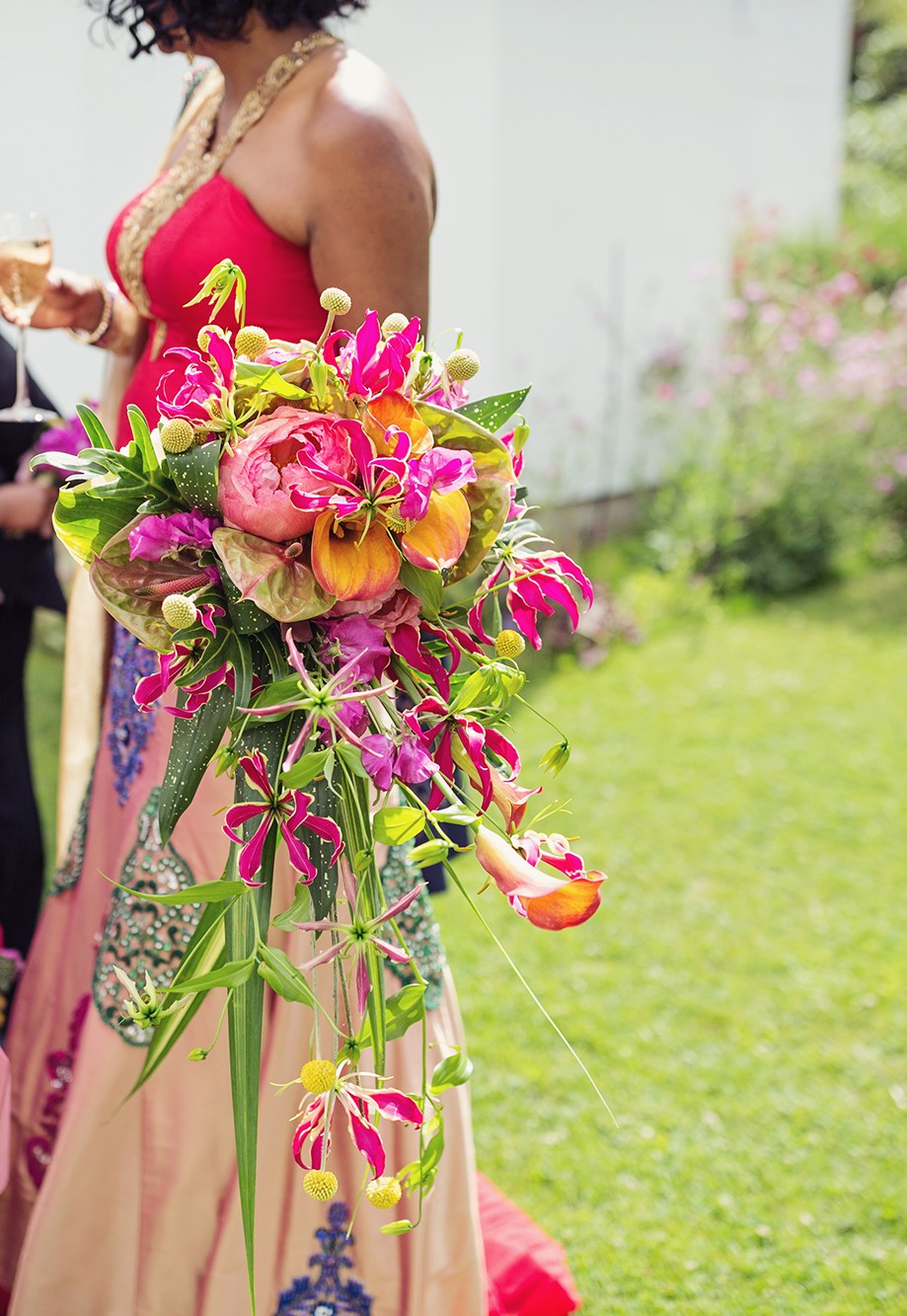 Memories to last a lifetime

Andy & Sukanya’s wedding was captured on camera by Tiree Dawson who came highly recommended. The couple were a relieved to learn Tiree was available to capture their wedding day photos, as her style of photography was perfect for their vision of how they wanted to remember the day. 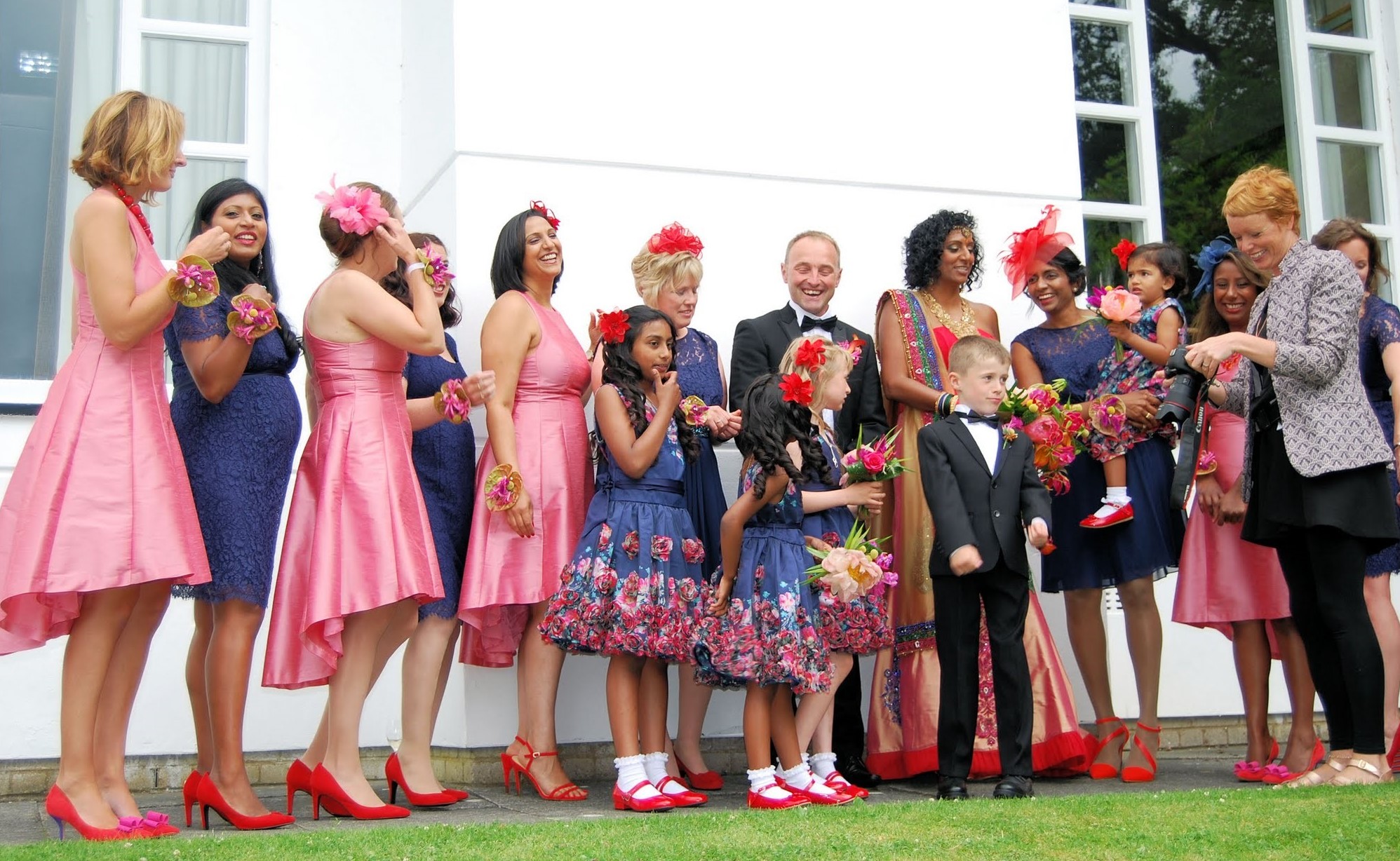 They had a pre-wedding shoot with Tiree, which was fun, and very informative. They felt it was great to meet with Tiree before the wedding, to get to know each other and understand what they felt comfortable with; They learned that they are not the most relaxed pair of models in front of a lens! Tiree gave Andy & Sukanya some handy tips to be mindful of on the day; They are not sure they remembered them, but judging by the photos captured, they think they did OK with the posed ones!

The expressions on the faces of guests, the emotions, the dramatic moods of the weather, and the sentiment of each part of the day was so carefully judged and captured. Andy & Sukanya relive moments of the day through their photos as though they were right back there. The couple think it takes a certain talent, eye for detail and natural empathy, in their view, to achieve such emotive reactions to photos, that Tiree seems to achieve, seemingly with little effort. Andy & Sukanya could not have wished for better! 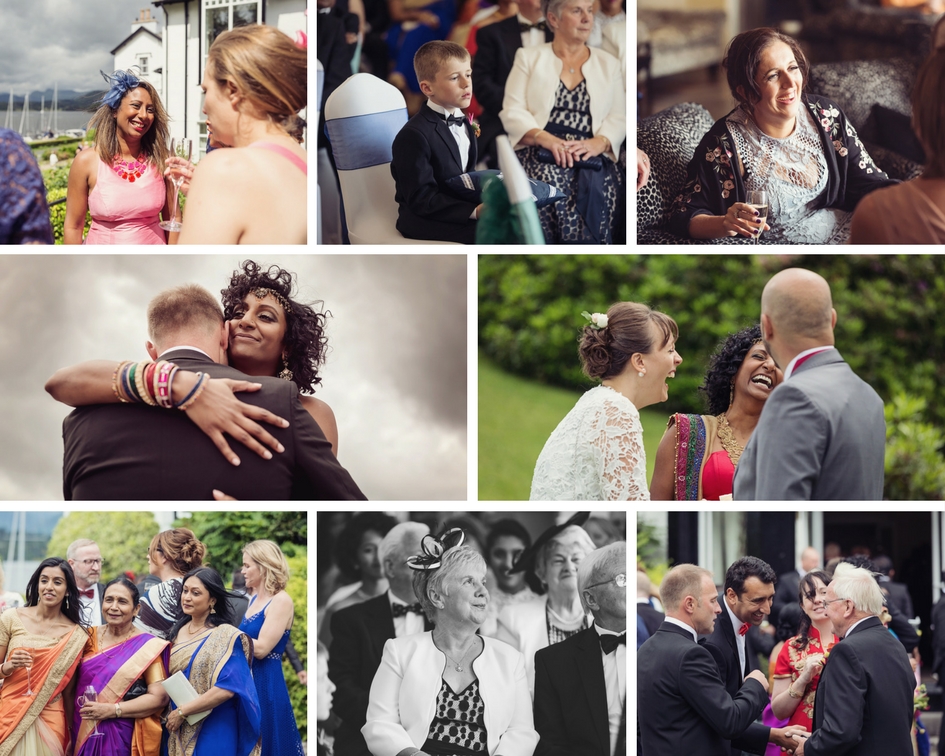 The couple have loaded their photos on a digital photo frame, so they can look at them popping up in a random play order as they pass through the lounge each day. They find it difficult to stifle the huge grin as the wonderful memories flood back! 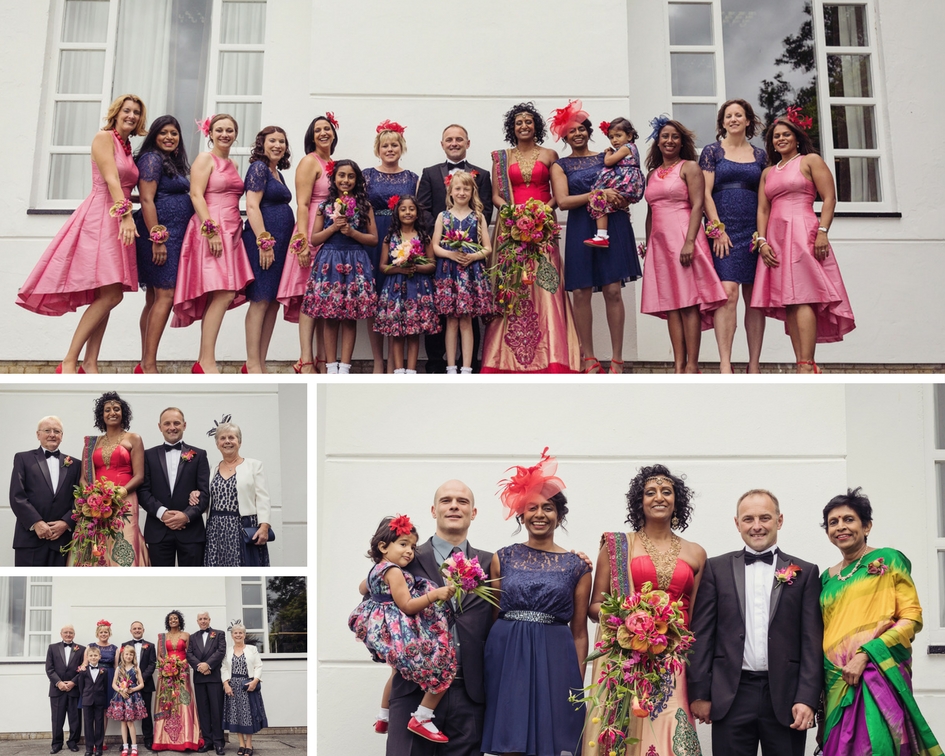 Our warmest congratulations to Andy and Sukanya as they start married life together.