We caught up with Low Wood Bay Artist in Residence, Shawn Williamson, who is creating a sculpture trail at Low Wood Bay. He is currently working on one of his most challenging pieces, a sculpture of our former Chairman and Managing Director, Michael Berry, and his faithful friend Sam the dog. Whilst chiselling out the rock taken from Low Wood Bay excavations during the development of the hotel, we managed to pose a few questions to this incredible local artist.

How did you first discover you had a passion for stone and an artistic ability to sculpt?

It was one of those strange things that I changed from woodwork to pottery at school because I liked to make figurines in clay. It developed from there. I think with me being left handed I was heavily creative and I was also good at doing things backward for some peculiar reason. I prefer to take material away rather than building it up. Although I can build it up, but I prefer to take it.

Can you tell us a little bit about what it was like to learn from the great Josefina de Vasconcellos? 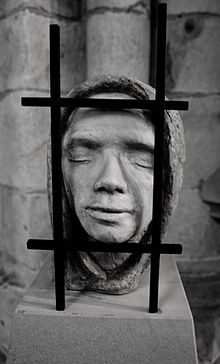 It was fantastic. She was a mentor as much as anything. I remember that she set me a task on one occasion to test me, and that was to go shopping for her in Ambleside. But there was a twist to that. It was snowing and she had some 1970s ski pants with some feminine-type decorations on them and she wanted me to put them on. I said that I really didn’t want to and she said, “Oh I see, so you are scared of the villagers are you. Scared of what they might think? Well, this is your first lesson”. So I had to put them on and go shopping in them. Most of the villagers didn’t notice, but one guy said, “Nice pants son!” which nearly killed me.

What has been your most challenging piece of your career? Well, the piece I am working on is very challenging. This is the direct portraiture of the great Michael Berry, whom I knew. It is not usually undertaken in this site-specific way, directly into an irregular block of stone. It is direct sculpture into stone itself, so we are into the realms, or the lower realms, of Michael Angelo. So this is one of the biggest challenges I think. Also, the Herdwick ram at Cockermouth which is just huge, 19 tons. That was a huge physical challenge. 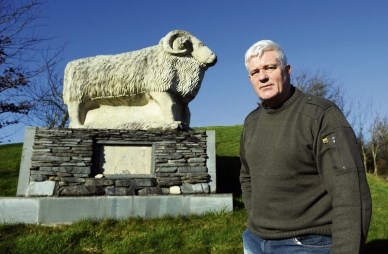 What happens if you make a mistake – is it easy to rectify?

Do you have a favourite Low Wood Bay sculpture so far?

So far, I think the one of Michael Berry and Sam is going to be the best one. I like working three dimensionally and some of the boulders are only part-3 dimensional. One of the tasks is the Lamb of God sculpture at Gordon Greaves Slate, and I think that will be my favourite.

You say each piece of stone has its own character, is it possible to describe the character of the one that you are currently working on?

Well, challenging! But also it is very consistently hard stone, so it is the best boulder of the lot really, but it is very hard. All the boulders are re-claimed and came from the excavation and development of the site. Some of the Low Wood maintenance team and myself sited the boulders and it is fair to say that this was probably the most challenging. You knew Michael Berry, do you get a sense of his character when you are creating his image on stone? And Sam’s character of course?!

I knew Sam rather well. Michael used to say ‘he might nip you’ and quite often he did, but hopefully it was a friendly nip. I used to go and spend time in Michael’s library and we’d have a few whiskies and put the world to rights. The next day he would have a task for me, sometimes a bit of scything or whatever.

Is sculpting from a photograph of Michael and Sam the dog more difficult than creating your own image?

Yes, it is a lot more testing because we’ve got a two-dimensional image that I’m trying to make look 3D. So working with light, shadow and impression. So it is a challenge. Hopefully very soon I will have it going in the direction I’m aiming for as I add the detail. Creating a Legacy of Art at Low Wood Bay

Please come and say hello to Shawn if you see him at work around Low Wood Bay creating an sculpture trail that will be enjoyed by guests and visitors for many years and generations to come.