There are hundreds of Lake District fells to be discovered and enjoyed. However, it can be a bit daunting, especially if you have bags of enthusiasm but don’t really know where to start. So, let us introduce you to Steve Watts, ex-Grenadier Guards, with over thirty five years’ experience of walking and running in the Lakes. He loves nothing better than sharing his passion and knowledge of the area with others. 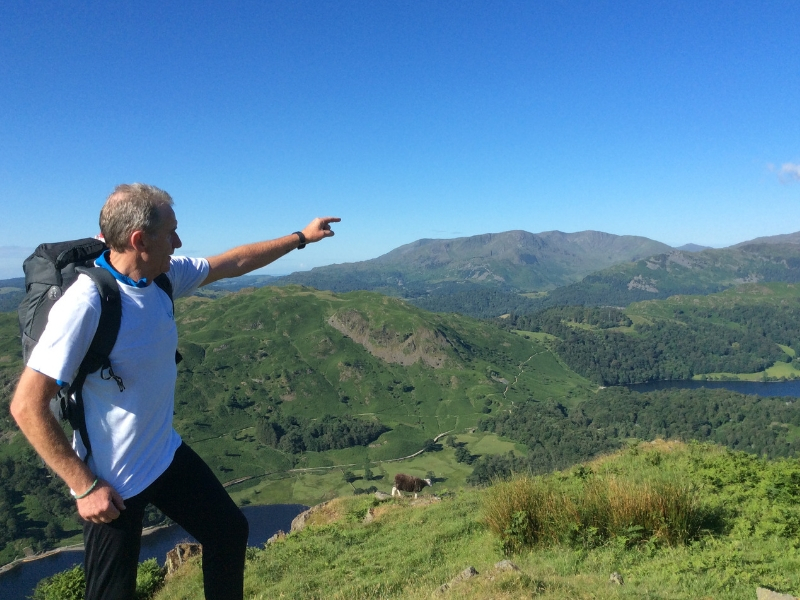 Tell us a little about yourself

I am a runner, a fundraiser and a storyteller. I remember hearing about a chap in the Lake District called Joss Naylor, a sheep farmer and fell runner. Amongst other amazing records, he ran 72 Lakeland peaks within 24 hours. Fascinated, I wrote to him and asked if I could meet him at his farm. Naylor agreed and I went to Wast Water to meet him. This was my first time in the Lake District and I was blown away by the beauty of the place.

Joss came off the hill, took one look at me just finishing a cigarette, and said,

“Thee lad, needs to stop thee smoking, lose some waaait and get on thee fells”

From that moment on I cut out booze and cigarettes and took to fell running. 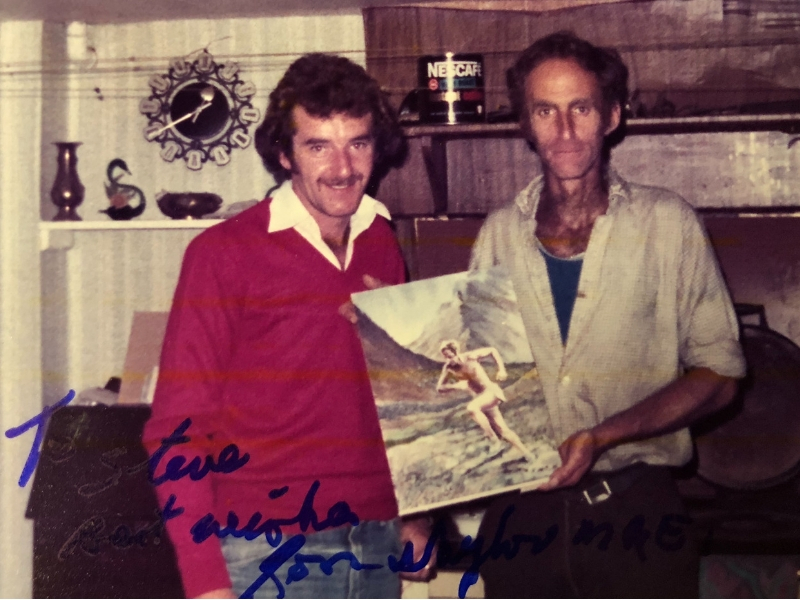 Four years later I ran the Bob Graham Round – 42 peaks and 72 miles within 24 hours. Who should present my certificate but Joss Naylor himself, giving me a wry smile in acknowledgement of my journey to fitness and success.

How did the Fundraising come about?

An article about my involvement in the Bob Graham Round featured in a local newspaper. I was contacted by a colleague who asked if I could do a fundraising run for a child in the local hospital who needed a ventilator. A 58-mile run with my retired Trailhound Rob,managed to raise the necessary funds for the ventilator.

Several months later my own son, Matthew, was rushed to the same hospital. The consultant recognised me and, once Matthew had the all clear, asked if I would lead a fundraising campaign to raise £1 Million for the first children’s CT scanner. There were a number of events, including one called Children running for Children, where 7,000 children took part in a family run, raising £130,000. We reached the target in just 2 years.

You’ve had your own health concerns…

Yes, in my late 50s I became quite ill and it ended in me having a pacemaker fitted. I thought I would never run again, but with excellent support I made the journey to recovery.

On my 60th birthday, my brother Peter gave me a card that had a few numbers written inside. I didn’t realise these numbers were the co-ordinates for Everest Base Camp. It had been my boyhood dream to follow in the footsteps of Hillary and Tanzing. Peter then produced air tickets to Nepal! The plan was that both of us would go to base camp and then summit Kala Patthar. 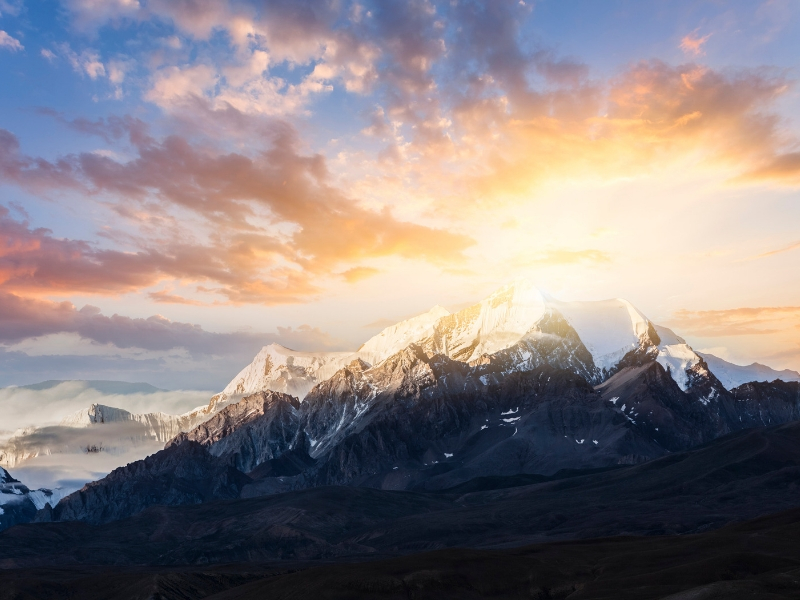 After seven amazing days hiking we approached base camp. Something was not right, and as we drew near we saw a helicopter deliver two body bags and an injured person. This was the catastrophic avalanche that buried sixteen Sherpas on Everest – the mountain’s worst tragedy. Although everyone was badly shaken by the news, and all the summit attempts cancelled, the Sherpas in charge of our group decided to continue with our journey to the summit of Kala Patthar to witness the sunrise on Everest. Those days gave us a whole new respect for the people living in the land of the giants.

I couldn’t help thinking about the people who would be most affected by the avalanche and loss of loved ones. I promised myself that I would return to do the Everest Marathon, raising as much as I could for the Himalayan Trust UK and British Heart Foundation under the title Heartbeat for Everest. 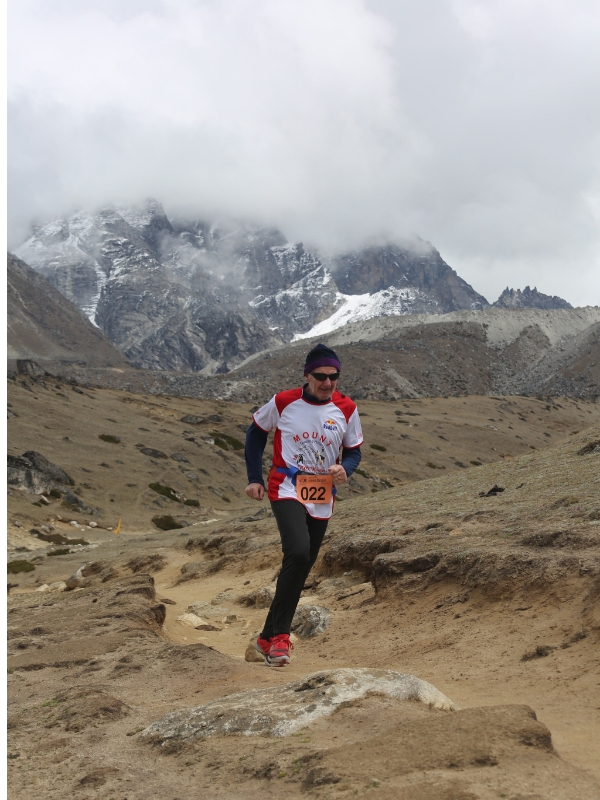 At age 63 I became one of the oldest people to complete the marathon and the only person to complete it with a pacemaker fitted.

It wasn’t an easy run, especially as I fell and smashed my big toe. From the halfway point I had to limp, but was determined to finish the race. Just under ten hours later I crossed the finish line.

I’ve been asked why I would even contemplate such a challenge. It certainly wasn’t for the achievement, I knew how difficult it would be! It was simply to give something back to the humblest people on this planet. My main objective in life now is to try and Inspire the next generation of Lakeland Lovers. Life isn’t a rehearsal. You’ve got to grasp every opportunity, and when you can, get out on these hills.

We’ve teamed up with Steve of Lakeland Walks & Talks who is happy to show you the Lake District’s hidden Gems from waterfalls to caves, summiting a mountain, and sharing some of the Best Panoramic Views in the World. 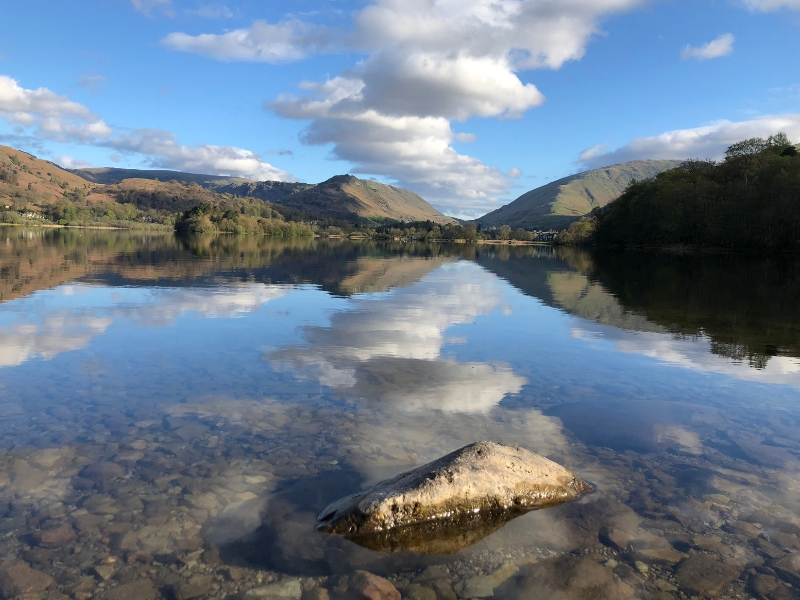 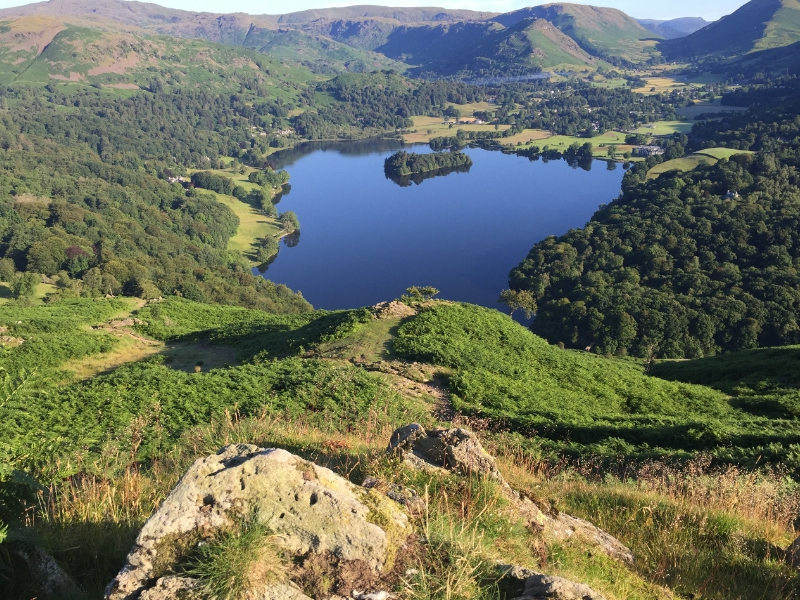 View from top of Loughrigg towards Grasmere

Steve will meet you at Reception and, after a short briefing, the journey begins by visiting Rydal Hall Gardens & Estate the Jewel in Lakeland’s Crown. At the same time you will learn all about the local people & their pastimes such as Hound Trailing & Fell Running. The walk then continues along the Coffin Route,  an easy to moderate walk to the tranquil shores of Grasmere. 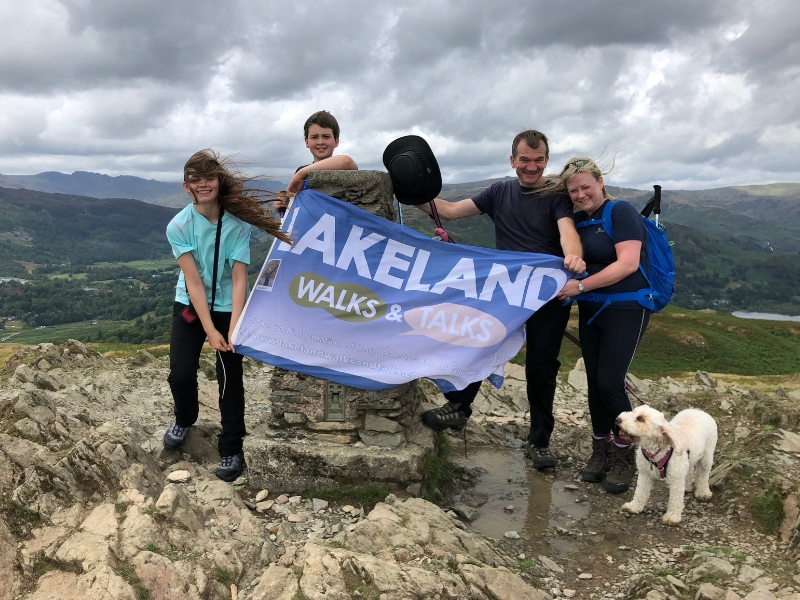 Another happy group of walkers reach the top

For the more adventurous there’s the opportunity to make your way to the summit of Loughrigg for a view that will simply take your breath away!

Our journey ends back at the hotel where you will be presented with a Certificate of Achievement as a memento of your day in the hills.

Book Your  Next Adventure

To book Steve for a day out in the glorious Lake District countryside, simply call Waterhead on  015394 32566, or ask at Reception.