The Lake District is now a World Heritage site inscribed under the cultural landscape category. The spectacular landscape is well known to have inspired poets and artists of the romantic movement. Even, earlier than that, however, the Lake District had a proud sporting heritage which is celebrated every year at the various country shows. English Lakes has a long, fruitful and continuing association with Ambleside Sports, held each year in July - a great day out for all the family.

As early as 1946, the then Manager of Low Wood Bay became President and in 1979 our previous Chairman and Managing Director, Michael Berry, took the role and became a stalwart contributor, helping to make the event the tour de force it is today.

There are reports of sporting events at Low Wood Bay from as early as the 17th century, with mentions of regattas, wrestling competitions and, unacceptable now of course, cock fighting and bare fist boxing. However, it wasn't until Queen Victoria's golden jubilee in 1886 that the now named, Ambleside Sports, came into being. It was a glorious celebration and one that the locals intended to repeat. 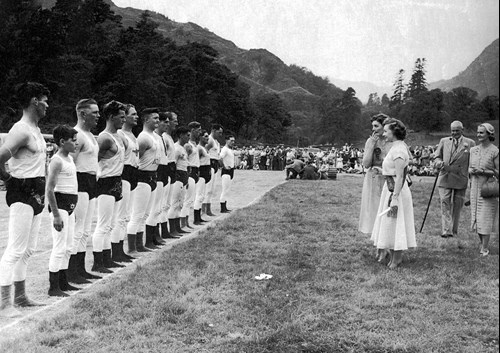 "It is a long time since any of this class of sports were held at Ambleside, but having broken the ice, as it were, it is the intention, so I hear, of those gentlemen who took the

initiative in the above, to try to make them annual"

The principles of sponsorship were quickly established and prizes were donated from the local tradesmen and "a sum of money from the gentry." The Boer and Great Wars affected the succession of the event but post WWII, it had a new name, Ambleside Hound Trail Sport, and a new setting in Rydal Park where the Sports are held today. 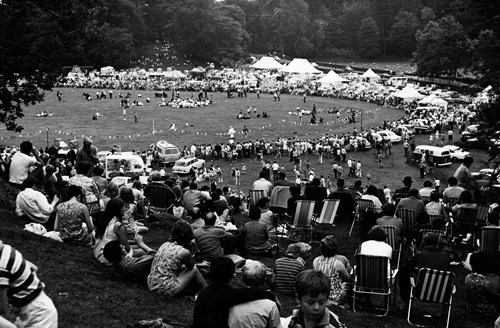 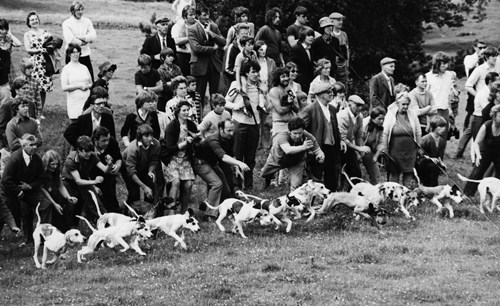 In 1946 The Westmorland Gazette records,

The Sports first AGM was held at Low Wood Hotel in 1946 when the Manager nominated as President. It is an association that has been maintained to the current day. Over the years, extracts from the minutes interest and amuse. In 1972 it was noted,

Obviously, they were people of action as the 1973 minutes record,

Hurrah! New wooden toilets with a deeper trench were satisfactorily in use all day. 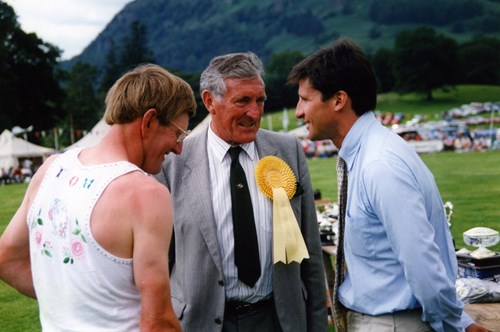 English Lakes continued the strong association with the sports, our former Chairman and Managing Director becoming President in 1979. Michael Berry had been attending the event since the 1950s whilst on family holidays and continued his annual attendance when he relocated to the area in 1972. Jak Hirst, current Ambleside Sports Chairman remembers,

Michael was very good at 'moving and shaking' people. It was his initiative that brought about the Life Membership Scheme following an extremely wet and financially disastrous year for the sports. This scheme saved us from financial ruin. In 1994, Michael invited Sebastian Coe to come and open the sports attracting a lot of people who might not otherwise have thought of coming along. 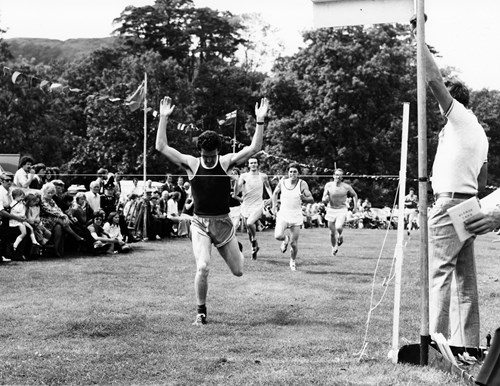 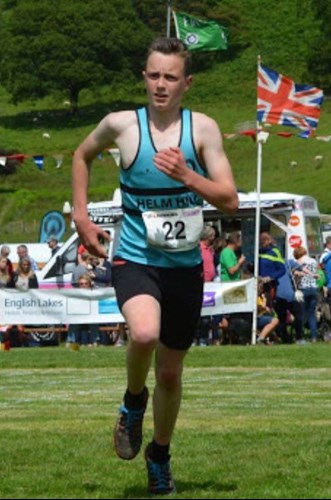 Things have changed little over the years - admittedly the prize money is different, running shoes have probably improved, competitors now come from as far afield as Australia and 1998 saw the first female wrestler - but in essence Ambleside Sports remains a celebration of local traditional Sports, notably Cumberland and Westmorland wrestling, Hound Trailing and 'Guides' Fell Racing.

Featuring the traditional 'back hold', to defeat your adversary you must break the hold on land your opponent on the ground. If there is no winner, the round is declared a 'dog fall' and the competitors begin again. 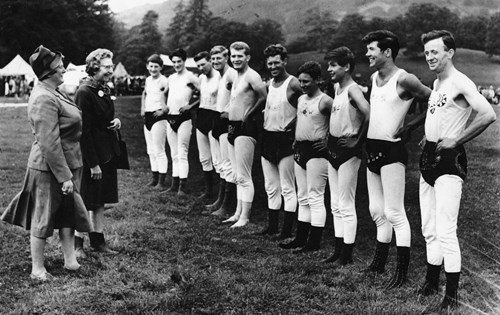 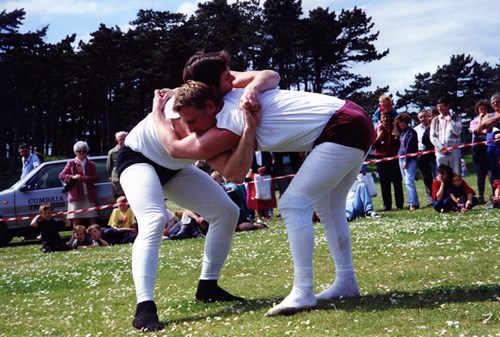 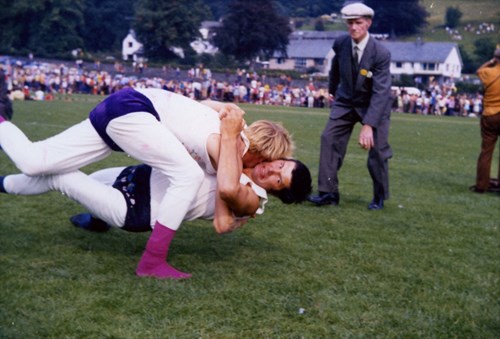 The 'Cry of the Hounds', introduced by Michael Berry, is relayed across the field and heralds the opening address of the sport's President each year.

Hound trailing has its origin in the farming community and is a race between competing hounds from a prescribed start (the slip) following a laid trail (10 miles for senior hounds, 5 miles for puppies) back to the finish line. The route is defined by dragging the ground with a rag soaked in a mixture of aniseed, oil and parafin prescribed by HTA rules. As the hounds bound towards the finish line they are eagerly awaited by owners and bookies and greeted by a cacophony of barking, shouts and whistles. 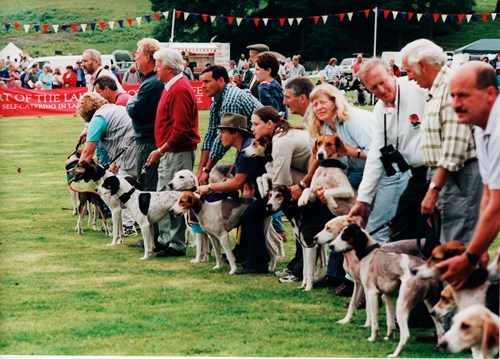 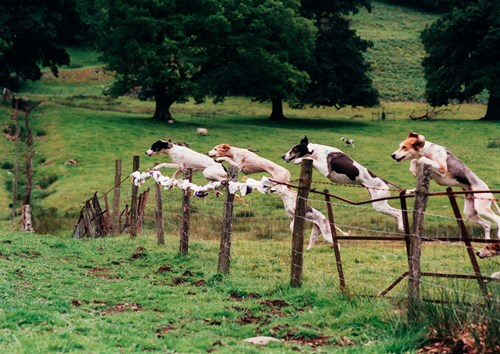 'Fleet of foot and of good stamina' is required to cover the course across fields, walls, streams and other rough terrain of a fell. The name 'guides' comes from 18th century tourists who called upon local fellsmen to guide them over mountain areas. One theory for the origin of the 'Guides Race' is that in their spare time the guides held competitions amongst themselves racing to the top of the nearest hill and back. There's always been great rivalry and camaraderie among the competitors and many lifelong friendships were forged as a result. 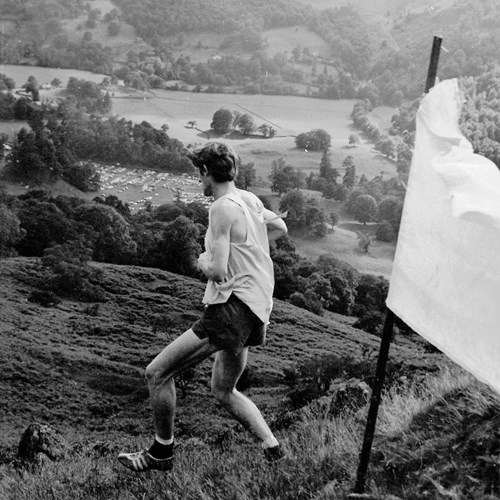 Ambleside Sports has survived war, fire, foot and mouth disease, weather and, one year, the discovery that they had no string for the finish line! It is one of the 'highlights of the Lakeland summer'.

Waterhead hotel and Low Wood Bay are just a short drive away from the Showground and an ideal stopping off point.