From Lancaster in the north to Wigan in the south - city, coast and countryside - Lancaster House is delighted to present their artisan Lancashire Afternoon Tea featuring award-winning produce from this great county. 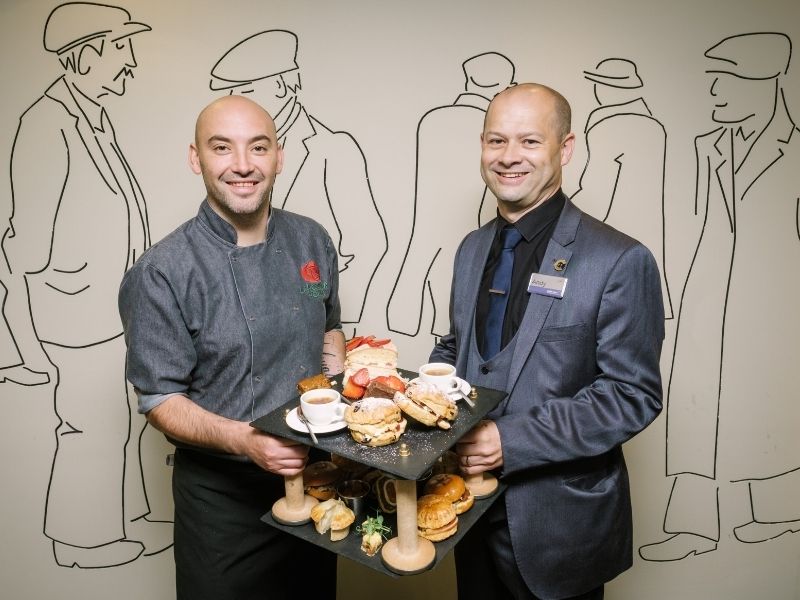 Every aspect of the Afternoon Tea pays homage to the history, heritage and culinary creativity of the County of Lancashire. The bespoke two-tier stand speaks to the county’s proud history in slate mining as well as its cotton spinning and weaving heritage. As for the food, Lancaster House takes us on a culinary tour around this award-winning food and drink county. 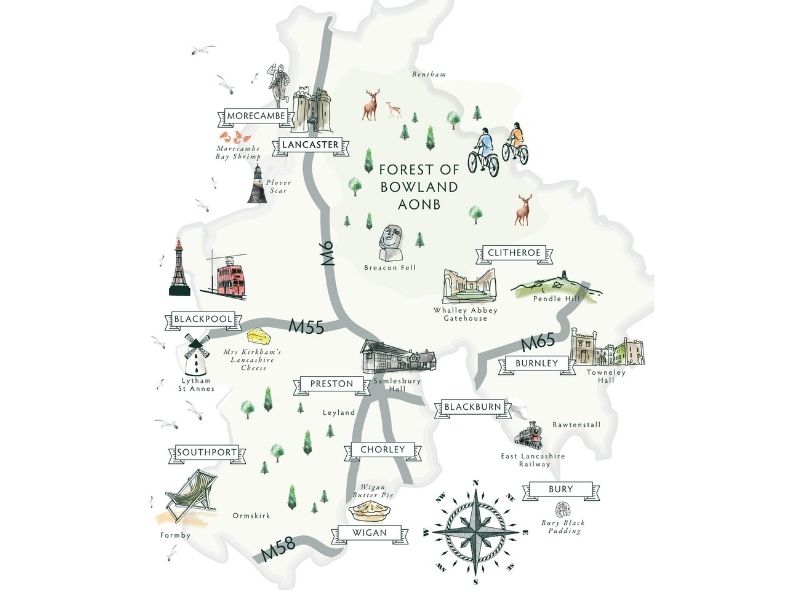 Bury became the UK home of black pudding when European monks brought their ‘blutwurst’ (blood sausage) recipe across the ocean and settled in Lancashire. It was renamed ‘black pudding’ and nowadays the Bury Black Pudding Company is the only company in the town making authentic Bury Black Pudding. It’s known in restaurants far and wide for its unique flavoursome taste. 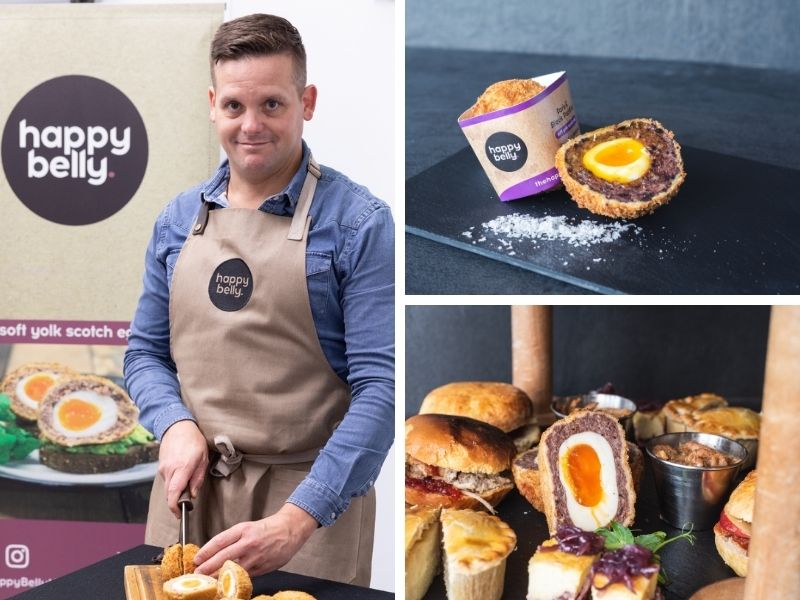 Brendan Baury of Happy Belly in Bolton is passionate about elevating the humble Scotch Egg, just because he loves scotch eggs, and he knows how to cook! Wrapped in the award-winning Bury Black Pudding, this recipe truly takes the scotch egg soaring to new heights. It not only adds taste to the savoury selection of the Afternoon Tea, but a splash of runny sunny yellow as well.

Steve Seddon has been brought up in his family business, supplying meat around the county and further afield. He knows exactly which farms the livestock comes from, and visits the auctions and farms himself to assure authenticity, and that the animals have been well reared. Part of a small team, Seddons pride themselves on sustainability initiatives and are passionate about keeping food miles low. As well as supplying to local businesses, Steve runs a traditional butcher’s shop, and Seddons meat can be found at local farmer’s markets. 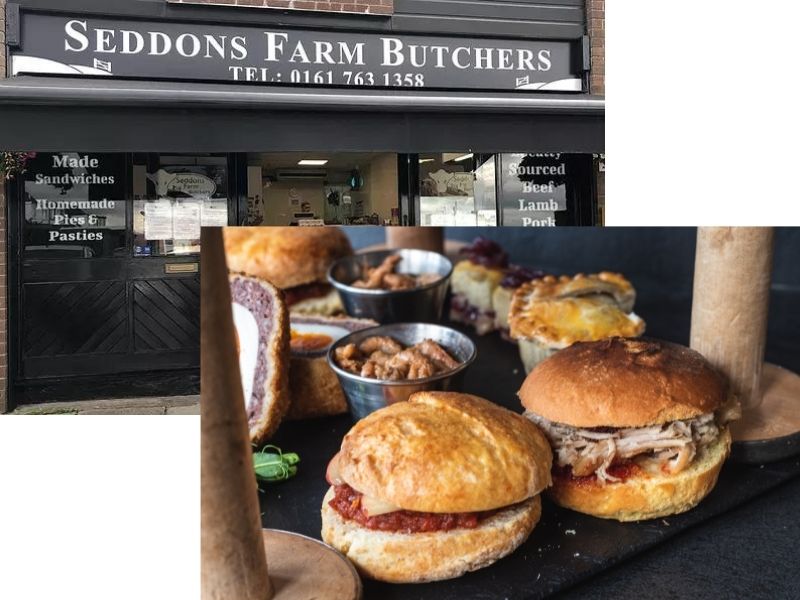 Head Chef, Damian, has features Seddon’s pork in the pulled pork slider – a substantial element in the savoury layer of our Lancashire Afternoon Tea, and Lancashire’s robust response to the traditional dainty little Afternoon Tea sandwich! 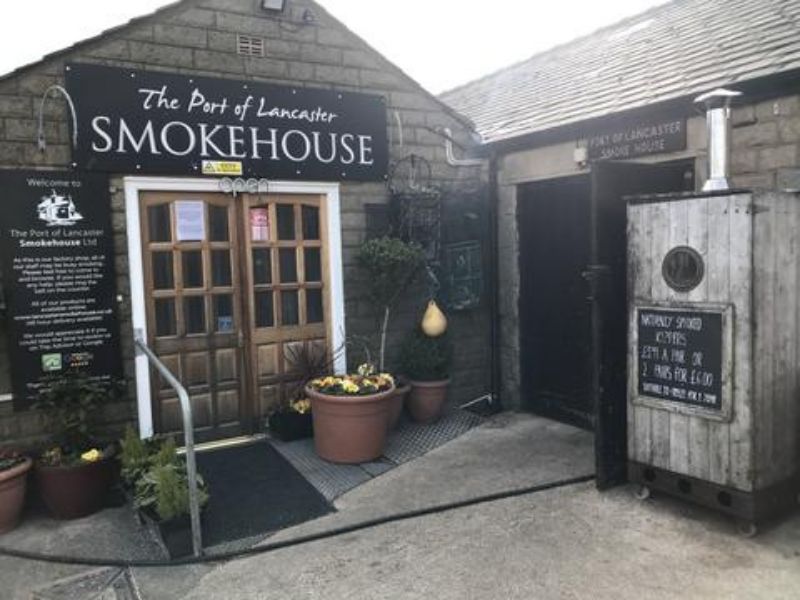 Established over fifty years ago, The Port of Lancaster Smokehouse is a family run business. The methods they use to smoke and cure their products are traditional, adding only salt, smoke and time. That last element is very carefully monitored  – the shorter the time from the catch to the Smokehouse, the more sumptuous the flavour; the longer the smoking process, the richer the flavour. Chef has incorpoated Port of Lancaster's beautiful smoked salmon to top off the Lancashire Afternoon Tea’s ‘fisherman boat’. 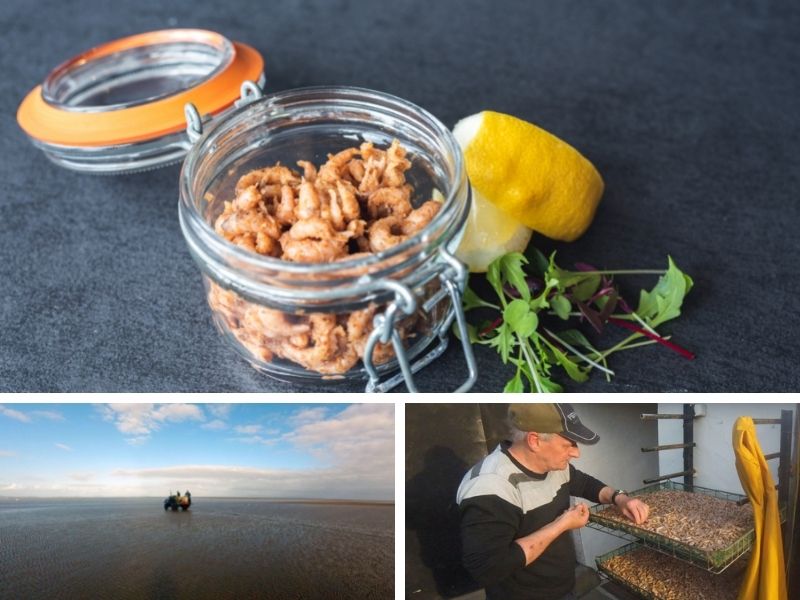 Frank Benson started shrimping with his Dad when he was seven years old, and he was the third generation of the family to do so. Frank has gone on to teach his son this traditional craft. When Frank started in the industry, shrimp nets were pulled along the beach by horse and cart. These days, horse and cart have been replaced by a tractor. However, there is no substitute for the lifetime of knowledge that Frank brings to the industry. It is also vitally important to know the tidal patterns in order to avoid the shifting quick sands that have cost lives over the years. Frank is one of only a handful of fishermen shrimping in this traditional manner.

Back home after the catch, in a production and potting facility behind the house, Frank riddles the shrimps and puts them into a large boiling pot prior to cooling and refrigeration. The shrimps are ‘picked’ by hand – a process of detaching the head of the shrimp from the body which Frank remembers as a pastime that would engage the whole family. This is certainly not a high tech operation, but Frank maintains that automation can alter the taste – and not in a good way!

Ronald and Patricia Galloway opened their first bakery in 1971 and have been making scrumptious pies and pasties ever since. Such was the quality and taste of the Galloway products that their reputation for great food spread, and the business expanded steadily over the years. Despite the growth of the business, the Galloways ensure that hot pies are baked fresh every day in each one of their twenty-five shops. 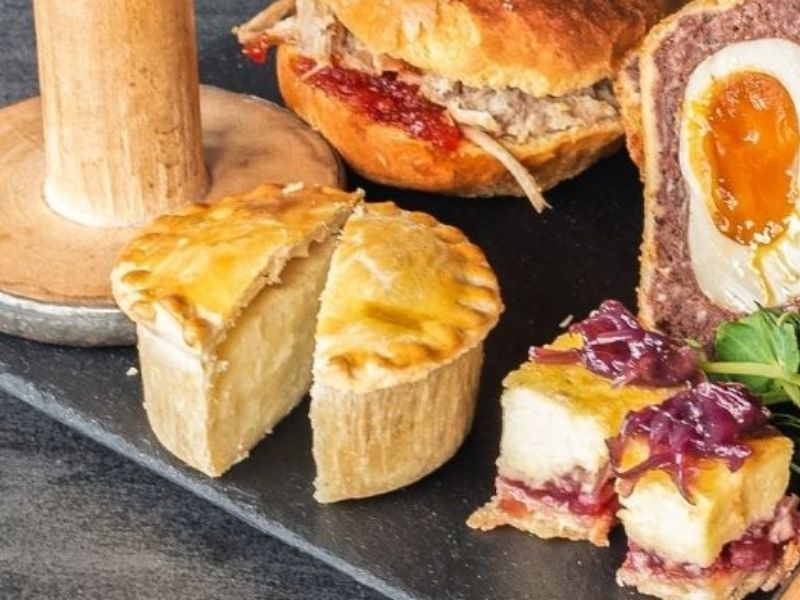 We are delighted that the Galloways Bakery agreed to make us a miniature version of their Butter Pie, a true Lancashire favourite. The recipe for this tasty pie dates back to the 18th century in Preston, or ‘Priest Town’ as it translates. After the English reformation, Lancashire remained strongly catholic and upheld the tradition of not eating meat on Fridays. Pies were a staple in the area and were eaten every day. Preston Catholics swapped out the normal beef, for butter, and Butter Pie was created. A pie that could be eaten on Fridays when meat was discouraged.

Mrs Kirkham of Beesley Farm, Goosnargh has been making cheese since 1978 when her mother passed down the family recipe.  Her son, Graham, joined the family business some years later and went about installing a new state of the art dairy and milking parlour for their cows.  Mrs Kirkham has always believed that happy cows are the recipe for great cheese. They only use milk from their 100 strong herd of happy Holstein Fresians, the main ingredient of this tasty cheese. It is the only unpasteurised Farmhouse Lancashire Cheese in the world.  Amongst a host of awards, the company are proud to have been winners of 'Best Artisan Cheese Producer ' in the World Cheese Awards. 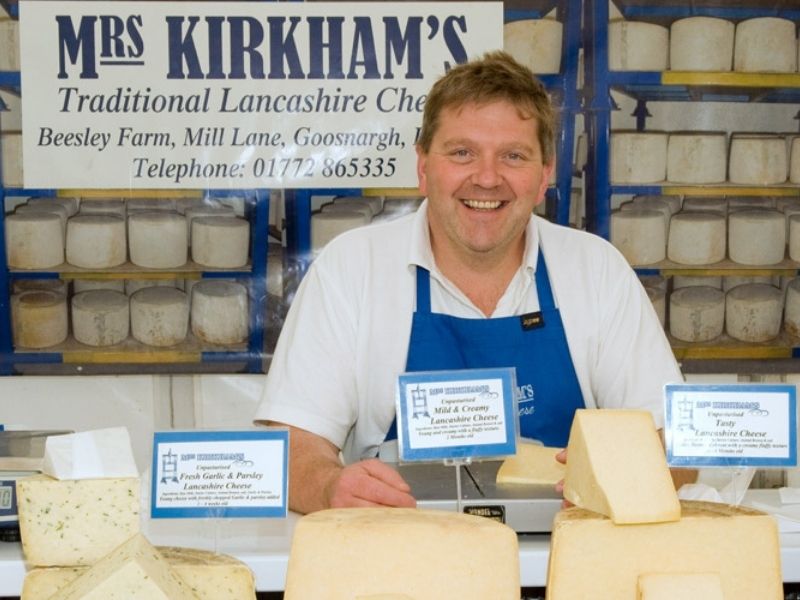 Graham Kirkham, with a selection of their award-winning cheeses

The cheese is so good it makes two appearances in our Lancashire Afternoon Tea, in Mrs Kirkham's Lancashire Cheese & Red Onion Marmalade Quiche and in Lancaster House's signature Cheese Scones.

Filbert’s Bakery of Lancaster’s Chocolate and Peanut Brownie. It’s got to be one of the best in town! Fil Duirwyn, a pillar of the community and champion of local ingredients and projects, bakes with gusto and great generosity. These brownies ooze love on the plate. 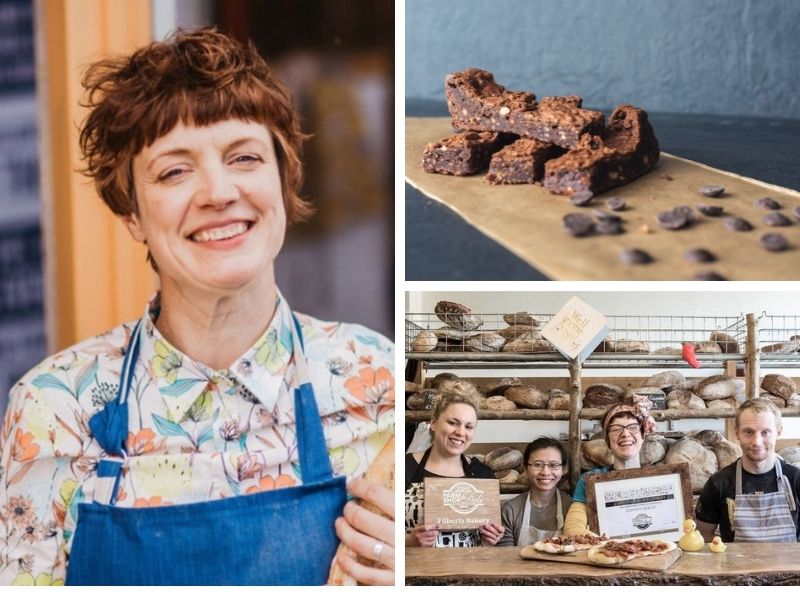 Fil Duirwyn, her team of bakers and their amazing Chocolate Peanut Brownie 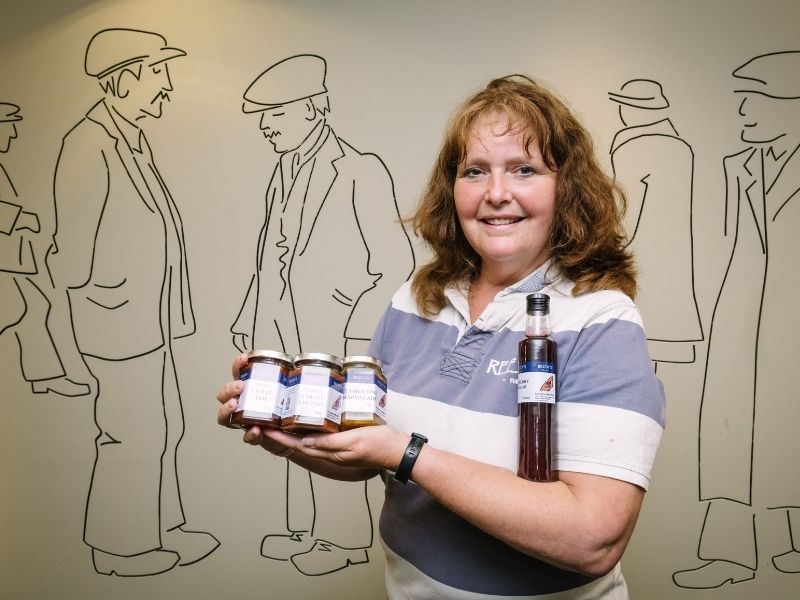 Sarah Reedy with a selection of her preserves

Sarah Reedy loves nature, cooking and gardening and it was these passions, along with a greenhouse of unripe fruit and veg and a 1920s cook book, that launched what is today Reedy's Naturally. in 2007 Sarah's Mum lent her an aluminium maslin pan, a wedding present from 1954, and so began the journey to create the freshest, most delicious recipes for jams, chutneys, relish, oils and vinegar.

Sarah employs a traditional method for setting her preserves using hand-made Bramley apple pectin and freshly squeezed lemon juice. The products are made in small batches and taste tested until just right. It doesn't get more authentic than that. Chef has incorporated Reedy's Naturally Sweet Chilli Jam in the Pork Slider, Tangy Tomato Chutney with the Cheese Scone and Natural Strawberry Jam in our home-made sweet scone.

The Lancaster House chefs have also been baking up a storm. In future blogs we will tell you more about the Lancaster House signature Cheese Scone, our sticky Ginger Parkin, Atkinson Coffee Crème Brule  and our Lancashire Courting Cake. For now, be assured that we will keep those Afternoon Tea stands full to overflowing with reet good Lanky scran.

Our Seasonal Offers at Lancaster House


Special Offers Direct
Be the first to see our exclusive special offers newsletter by signing up today.
Just click below to sign up
Special Offers Signup