Visiting the small towns and villages around the Lake District will give you a real sense of the culture and heritage that we prize so highly. There are many to choose from, but we've suggested five to put on your Lake District itinerary.

One of the most popular Lake District villages, Ambleside is a bustling and vibrant place to visit. It’s rural setting with narrow lanes and ginnels, surrounded by mountains on three sides and the lake to the south, make it seem compact and picturesque. Stone and slate built houses, including 38 listed buildings dating as far back as the 17th century, are of architectural interest and speak of the rich heritage of local quarrying. 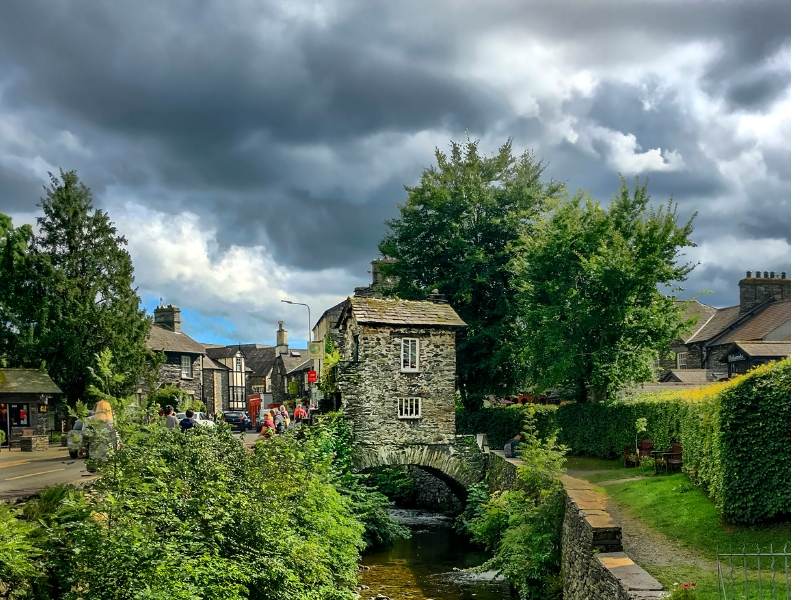 Of particular note is Bridge House, a tiny house built over Stock Beck. Now owned by the National Trust, Bridge House is one of the most photographed houses in the Lake District. Previously however, it was used as a counting house for Rattle Ghyll Mill, a shop for a cobbler, a weaver and a chair maker, a tea room, as well as a home. It is free to pop in to view the scantily furnished rooms. You will be amazed that this once housed a family of eight people! 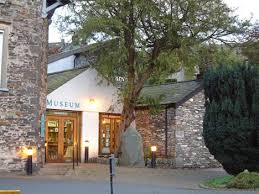 It is worth taking a turn around Armitt Museum in the centre of the village. This has a collection of archaeological finds (there has been a settlement here since Roman times), paintings, books, manuscripts and local memorabilia. There’s also a room dedicated to the life of author and Lake District land owner, Beatrix Potter. 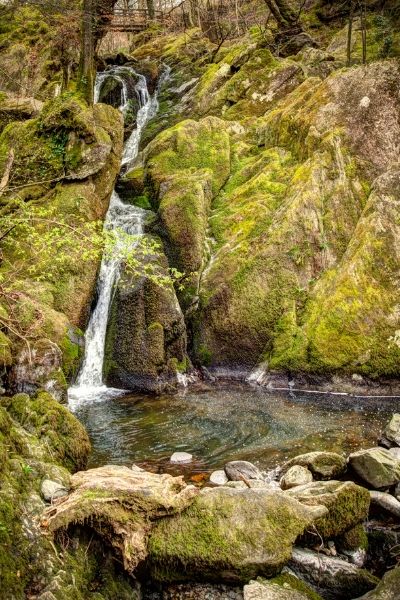 You should not visit Ambleside without taking a short walk up to Stock Ghyll Force, a magnificent 70 foot waterfall in a shady wooded area just above Ambleside. The force of the water was used to drive two water mills in their day.

Another pleasant stroll is through Stagshaw Gardens, situated on the edge of the village. This has a magnificent collection of rhododendrons, azaleas and other interesting shrubs, particularly

In August, Ambleside Sports is one of the best attended traditional Lakeland shows where you can experience, among a host of other interests, Lakeland wrestling and the local sport of hound racing.

Although technically on the edge of the Lake District National Park, we’ve squeezed it in to our ‘must see’ villages as it is pretty as a picture. Built around the 12th century Cartmel Priory, there is an enduring beauty and air of peace that seems to emanate from the Church. The building itself has beautiful stained glass windows, ancient choir stalls and a real sense of history. Cartmel Priory Gatehouse is now a heritage centre that tells the rich and interesting story of the Priory and the village. 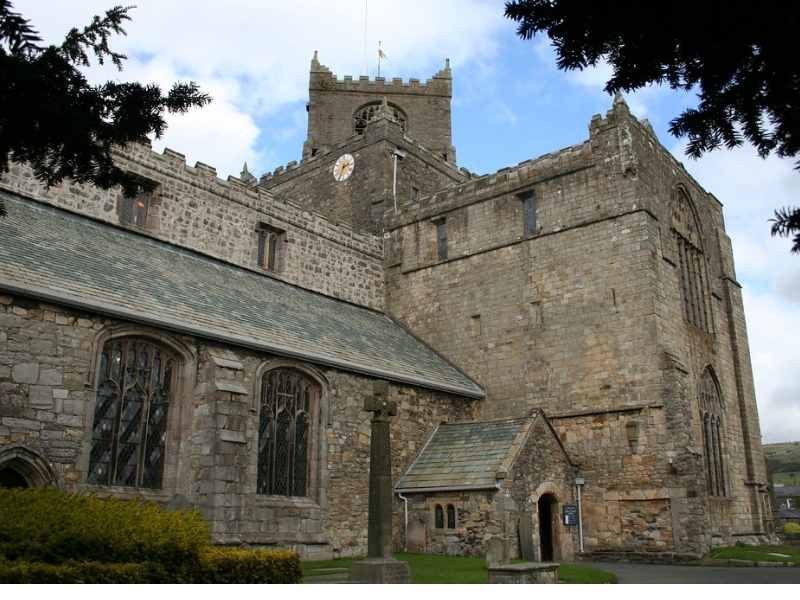 Emanating from the village square, with its traditional market cross, water pump and fish slabs, there are a pretty array of shops and tea rooms. Chris Evans described the village as, ‘a thimble full of diamonds’. One famous export of the village is Cartmel Village Shop’s Sticky Toffee Pudding – whatever else you do on holiday, make sure you sample some of this dark and delightful gooeyness. 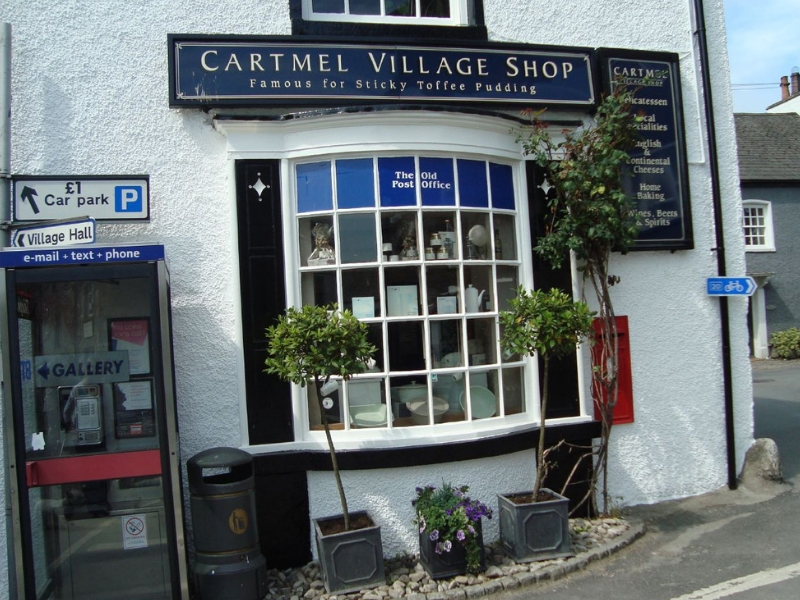 Cartmel Race Course, like the rest of the village, is small and perfectly picturesque. There are races here in June, July and August when visitors surge to the village and the population temporarily explodes. There is, of course, an ancient tradition of racing in the village. The 16th century monks were known to have raced mules around the site for pleasure. The Racecourse also plays host to concerts and events throughout the season – Sir Cliff Richard himself will be performing at one of the Race meets in June 2019. 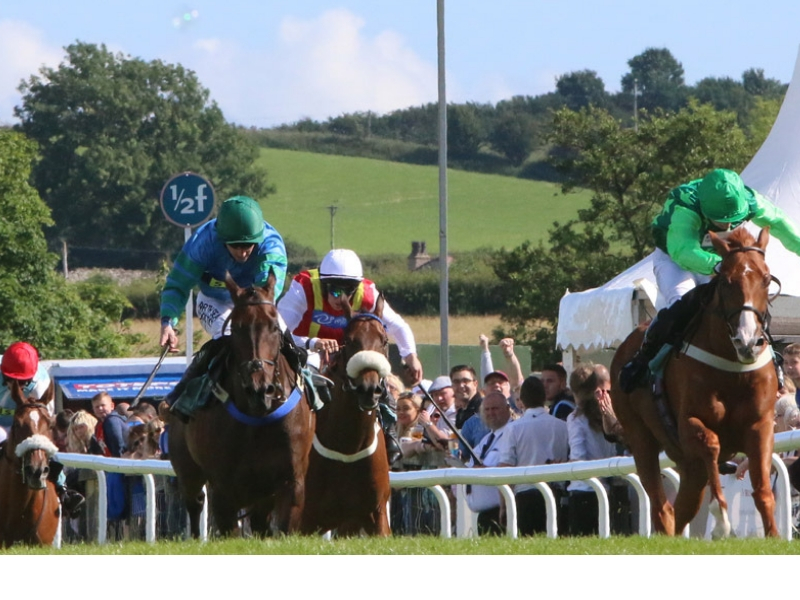 Carrying forward the trading heritage of the village, the monthly food market, selling a wide range of locally produced foods and goods, is well worth a visit. A great place to soak up the atmosphere and sample Cumbrian culture and lifestyle. 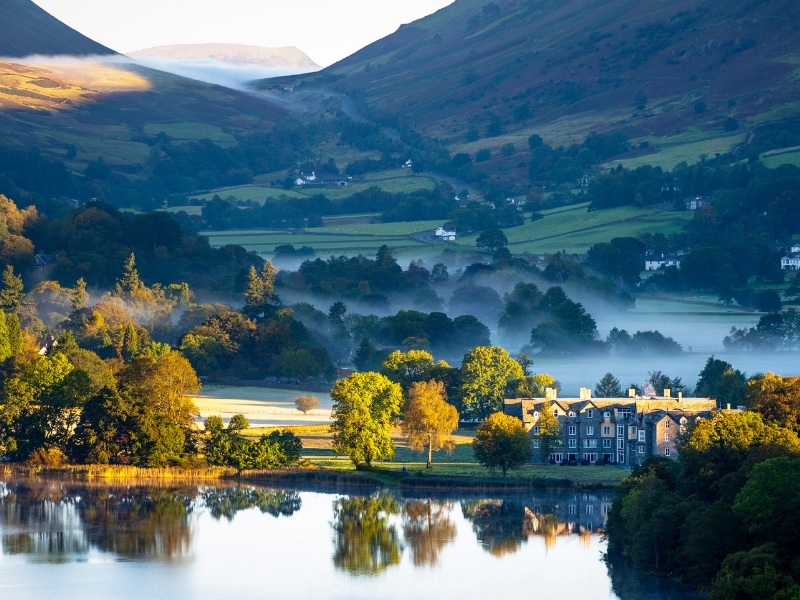 Although there is one name always associated with this village, there’s more to Grasmere than the Lake District’s favourite son, William Wordsworth. Having said that, it is definitely worth a visit to Dove Cottage, his family home from 1799 to 1808. The 13th century Church at the heart of the village draws thousands of visitors each year. Here you can see the simple grave stones of William and his wife, Mary, and other members of their family. 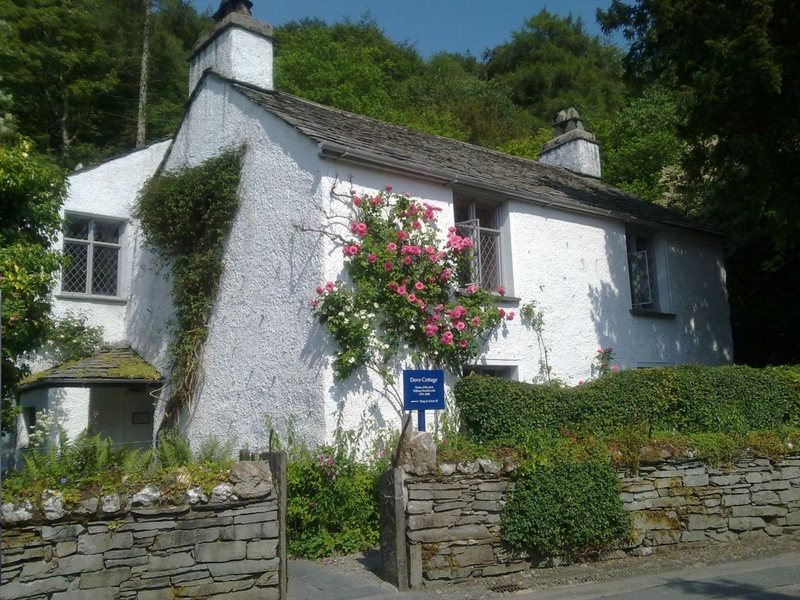 Most of the buildings in the village are Victorian stone and slate construction, but there are also a mix of older buildings, including many of the farms in the area. Church Stile, now owned by the National Trust, is a row of 17th century cottages just across from the Church. It was here that William Wordsworth, his brother, John, and Coleridge stayed during their Lake District tour in 1797.

There is a plethora of quaint shops selling gifts, local produce and novelty items. The Heaton Cooper art gallery and studio is a delight. William Heaton Cooper bought a piece of land beside the village green in 1937 and the following year his art gallery and home were completed. It continues to draw many visitors each year. There are three galleries exhibiting the art work of the Heaton Cooper family, and there are over a hundred prints by various artists in the family. They also sell a wide range of artistic materials for those feeling inspired. 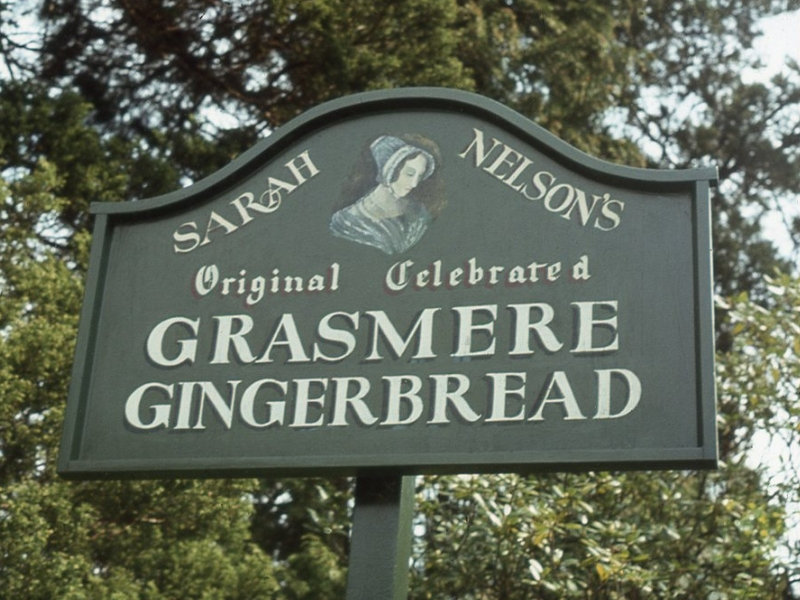 The popular Sarah Nelson’s Gingerbread Shop is a must for popping in to purchase a freshly baked slice or two of award-winning Grasmere Gingerbread. This recipe was created in 1854 by Victorian cook, Sarah Nelson. It remains unchanged, a delicious spicy-sweet biscuit-cake.

It is a short walk from the centre of the village to the edge of the lake, and a beautiful circular walk around all the way round. For those who would rather take to the water, there are rowing boats for hire.

Allan Bank, another former home of Wordsworth, is a superb National Trust property. Unlike any other, particularly for it’s very comfortable and informal atmosphere. Take a seat beside the cozy fire and read your book, or help yourself to a cuppa in the kitchen. There’s a dressing up room, art spaces and even indoor picnic areas.

Other local attractions include Grasmere Sports Day at the end of August. From late July to September, the Lake Artists Society exhibit their art in the village hall – this is always a treat with magnificent talent on display.

With a name that means ‘Cheese Farm’, Keswick has a distinct market town heritage reaching back to 1276. The heart of the village is Market Square where the Grade II listed Moot Hall stands proud right at the centre. Today it houses the Information Centre. Previously it served its purpose as a covered market, courthouse, museum and a prison.

There are plenty of interesting and quirky shops and galleries that span out from Market Square. Each Saturday, following an 800 year tradition, there is a vibrant open market. This is a great opportunity to sample local produce or pick up a unique piece of local art or crafts. 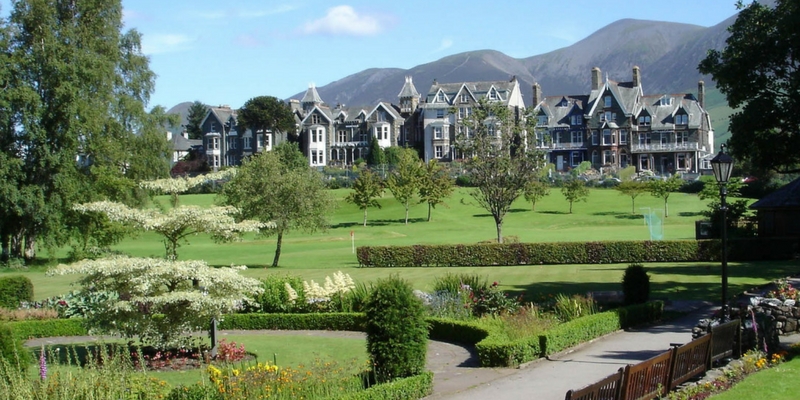 Two public parks offer space for all the family to enjoy the beautiful Lake District setting. Hope Park sits between the village and the lake and offers crazy golf, pitch and put and some well-tended gardens. Fitz Park is a superb play area for children and has riverside picnic tables.

Most people will explore the lake that Keswick sits beside. Derwentwater, 3 miles long and a mile wide, is a short stroll from the centre of the village. There are paths around the shore of Derwentwater, but many people choose to board the Keswick Launches on the regular cruises around the lake.

Another popular attraction is the Pencil Museum, home to the very first pencil. Production began here in 1832 and this is a treasure trove of information about the history of pencil making. There are art workshops and interesting demonstrations.

About 1.5 miles south east of Keswick there is the intriguing Castlerigg Stone Circle. The original purpose of this 4000 year old circle is not known, but it is a dramatic sight with panoramic views of the surrounding mountains. 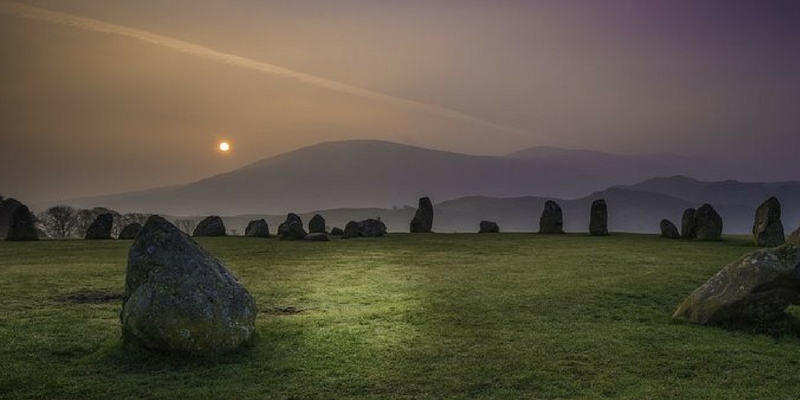 Check out the Theatre by the Lake which is, as the name suggests, right beside the shores of Derwentwater. Just a few minutes walk from the village, it has outstanding views and a full itinerary of productions through the summer season.

Nestled under The Old Man of Coniston, this village is a hive of walkers and climbers. The original settlement was based around Coniston Hall, a 16th century farmhouse. The re-vitalised copper mining industry in the mid-1800s brought new life to the area. 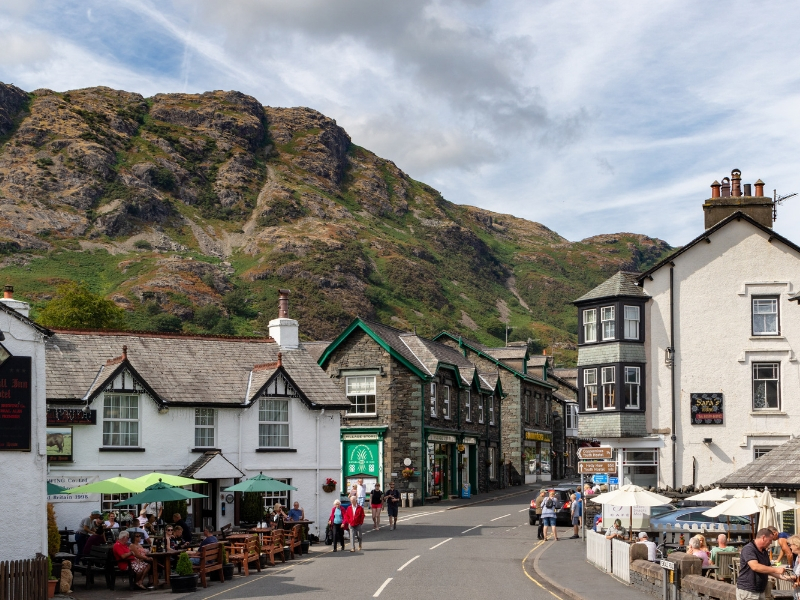 The village is situated beside Coniston Water which is five miles long and half a mile wide. Most people take a cruise down the lake in one of the two launch services, the National Trust Steam Yacht Gondola, or the Coniston Launch. Both services have a stopping off point at Brantwood. 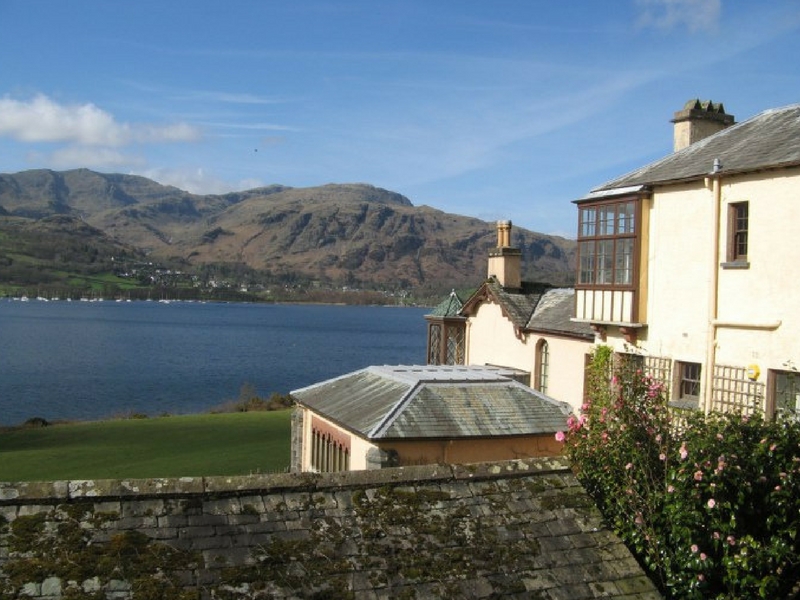 Brantwood was the home of John Ruskin from 1872 until his death in 1900. This historic house is crammed with Ruskin’s character, his paintings, furniture and personal effects. Visitors are free to roam around the house and gardens and there are activities for children to participate in. From the gardens there are superb views of Coniston Water and the surrounding mountains. There are fine examples of exotic plants as well as ancient woodland and a riot of colour.

Donald Campbell is famous for his successful water speed record on Coniston Water in 1955. Sadly, he died attempting the record again in 1967. There is a memorial to him on the village green.

Another famous character associated with Coniston is Arthur Ransome who based several of the locations in his book, Swallows and Amazons, around places known to him around the lake. 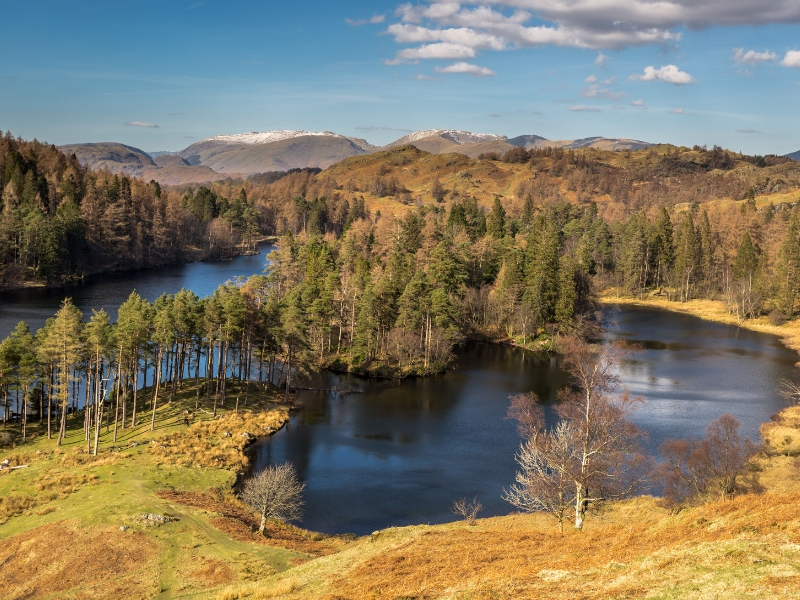 Very close to Coniston is the National Trust owned Tarn Hows, a man-made lake, that fits beautifully into its setting. It offers a 1.75 mile accessible circular walk around the water with great views – a lovely place for a picnic and a paddle.