We are particularly pleased to be welcoming the Jaguar XK Club back to The Midland this year for their annual Coast to Coast rally. These beautiful cars create quite a spectacle for guests and passers-by and we consider it a real honour to host them at The Midland - and their owners of course!

Barry and Margaret Lewis own a beautiful 1950 XK120 OTS and Barry tells us a little about how his passion for this car began and some of the fantastic routes it has taken them. Barry and Margaret and their beloved Jaguar XK 120

Smitten at the Age of Thirteen

In 1950, at the tender age of 13, I was working in a garage at weekends and during the school holidays.    The magazine 'Autosport' was delivered there weekly and I read it avidly.  In the magazine, great excitement was created by a new Jaguar model, the XK120 which, at the time, looked like something from another planet!  It was proclaimed the fastest production sports car in the world and verified the claim by achieving in excess of 132 MPH on the Jabbeke Autoroute in Belgium. 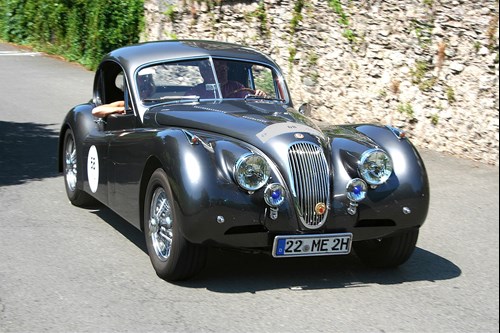 A short time later, I saw an XK120 outside the motorcycle showroom of Charlie Tyrer in Preston. Charlie's brother Gillie was a well-known jaguar racing driver and I speculate that he had brought the car to show it to Charlie.  I wandered round and round the XK absolutely mesmerised and so began a lifelong love affair. 48 years later in 1998, someone whispered to me that a 120 was for sale locally!  I didn't sleep for two nights and eventually after a large push from Margaret, I arranged to meet the car's owners Guy Garlick and Norman Oldfield. They had completely restored the vehicle and it was ready to go. This fitted in well with my plans as I felt that it was too late in life for me to start a restoration programme myself and I wanted to start touring immediately. After a test drive and much discussion we put a bid in and the deal was done.   The car was an early example, the 265th right-hand drive XK produced. Today, almost twenty years on, we have driven the car over 64,000 wonderful miles, all in the UK from Cornwall to the Orkneys, with our latest tour to the Outer Hebrides last May. 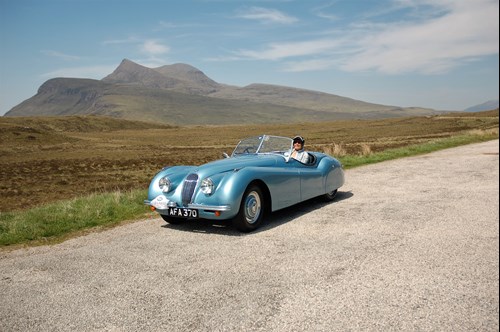 I have done all my own servicing and maintenance over the years. Having served a mechanics apprenticeship in the 50's this has been no problem to me, the car was from my era of experience, though later I had switched my career to aircraft.  We have overcome one or two issues but the car's reliability has been a testament to Guy and Norman's very capable engineering skills and a wonderful basic but advanced design by Jaguar, proven over and over again with its numerous victories in the 24 hours race at Le Mans.  The car has been kept as standard as possible with the only modern developments being made to the cooling system where I fitted a sealed system with a separate header tank and an auxiliary cooling fan,  XK's don't like standing in traffic jams!

The Route to Friendship and Fun 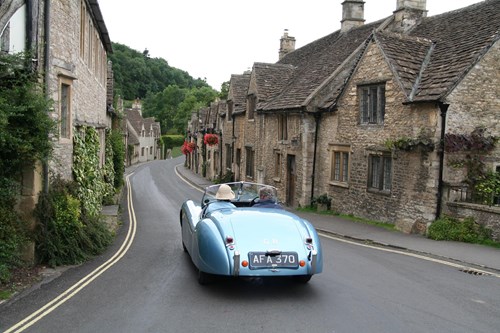 A major factor in the joy of owning this vehicle has been the incredible camaraderie added to our life by the Jaguar family of friends and acquaintances.  We are members of the International XK Club and the Jaguar Drivers Club.  We are also in a small group of six XK's known as ‘The XK Squadron'.  Amongst all these, we have met a lot of new friends and had a lot of fun along the way. We did the annual 'Coast to Coast'  last year, having not missed a Mike Griffiths tour since we joined the XK Club nearly 20 years ago.  Mike as the Northern representative of the XK Club is the supreme 'Route Master' and always devises an incredible tour on roads that you would not know existed. He has put a lot of effort and time, not to mention expense, into the enjoyment of many people and has become a very special friend to us.

There are countless routes for a Coast to Coast and Mike took us on a great one last year, as usual, where there seems to be no other traffic. They are, what he terms, XK roads!  My outstanding memory of it all was the 13 mile run through the Dalby Forest, marvellous!  We did 137 miles on the outward run and 160 miles to get back.  I have no doubt that he will excel himself again this year. Sadly it is his final tour as he approaches his 80th birthday. The Midland - A Warm Welcome Awaits 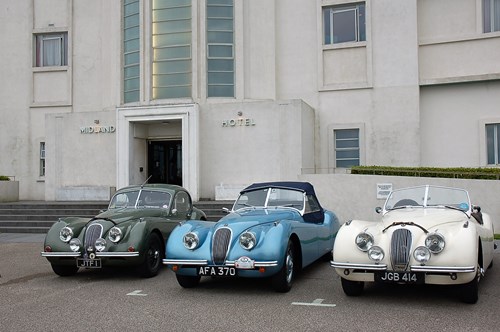 The team at The Midland are looking forward to a great line up again outside in the car park and the warmth of camaraderie so evident amongst the Club members. Barry commented that the XK owners are delighted to be returning to the hotel where they have enjoyed the comfort of the rooms and quality of food and service. He also noted that the parking and constant attention to the cars on the car park was exemplary.