When Jessica Roscoe, Lancaster House Group Sales, said 'yes' to the big question back in 2014, little did she know that she would be working for the venue that would host her wedding three years later. We are thrilled that Jessica has shared her wedding diary with us. We wish Jessica and James every happiness and can't wait to see the wedding album!

We had gone away for my birthday, just the two of us. In our hotel room James handed me a large box. Inside was a smaller box that said Leo Diamond. My heart started beating faster and faster and I thought I knew what it was. When I opened the box and saw the sparkly diamond ring I burst into tears. James asked THE question, “Will you marry me?” and I of course said “yes”! We decided to concentrate on buying a house before we got married but that didn’t stop me from buying every single bridal magazine I could get my hands on!

We’ve finally bought a house after months of looking. It’s a new home and will be ready in August. Then we can crack on with the wedding planning! (Not that I haven’t been using Pinterest 24/7 or buying more magazines!) Take a look at Jess' Wedding Pinterest Board here

We’ve been to 3 weddings already this year, all slightly different. I love going to weddings and seeing what other people have done. This has given us definite ideas of what we want, and what we don’t want!

Our house is finally finished and we’re moved in! It was so stressful moving and I had hundreds of lists. Luckily we have some very lovely friends and family members who have helped us, hopefully we can count on them when it’s crunch time for the wedding! Christmas has snuck up on us and we’ve not done any wedding planning yet! My friend Sarah had a party and one of the girls mentioned the place where they work called Lancaster House, close to the motorway which would be good for our family from Scotland and from down south.

Went to visit Lancaster House with my bridesmaid Layla who was visiting from Newcastle. Wow! This place is definitely the one. Going to take James one night so he can see it for himself.

Took James to Lancaster House, he loves it too!

We’ve decided to book Lancaster House! They have the date I want. I’m weird about numbers and if we get married on 8th September 2017 then when we write our wedding date down it will be 8.9.17 which when you add 8 and 9 together you get 17! The wedding is only a year away! How has this happened? We’ve picked our Save the Dates and they are so cute; they are little wooden hearts that have a calendar on them. I also started a new job this month, working for the hotel group that owns our wedding venue!!

Mum and I have been wedding dress shopping!  I am obsessed with the TV programme ‘Say Yes to the Dress’ so I’ve been getting lots of ideas and also learnt that I need to be open minded and not go with a specific dress in mind. Unfortunately everything was just too ‘shiny’ and I felt like a meringue! So I didn’t say yes to any dress. But I will not give up. It's not often you see the 'dresses that got away' so here's a peak. James and I have also had an engagement shoot with our wedding photographer- some of my favourite photos ever. We felt a little bit silly at first but we soon got into it and had a laugh. Mum and I have been wedding dress shopping again and I said yes to a dress! I tried on 3 dresses and the lady in the shop picked the third one out for and I completely fell in love with it. You will have to wait until September to see that one, however. We’ve also been for our menu tasting at Lancaster House. We took James’ parents along and they enjoyed seeing the venue and trying the food. The staff were really attentive and the food was to die for. Choices made!

My mum has found my bridesmaid dresses in a charity shop! They’re all the same size, in the same style and colour and have never been worn. They are literally perfect!

Choosing our music for the ceremony - boy was that hard work! We don’t agree on music as we’ve both got different tastes so it’s been really difficult. My dad is also a massive music buff so every time we would mention a song he would find a reason why it wasn’t suitable!

We’ve also sent out our invitations! It’s so exciting getting the RSVP’s back, I find that I’m judging people on their menu choices though, who chooses fish when there is steak on the menu? Mum came to stay for the night and helped me put together our bouquets. We are using silk flowers from local supplier, Barton Grange, who have a fantastic range.

We’ve ordered our cake from Enchanting Cakes in Darwen where my parents used to live.

The wedding rings are also ordered. Funnily enough it has been James who was the fussy one with his ring! I just wanted a very simple white gold band to match my engagement ring. James wanted something that was hard wearing for his job. He doesn’t wear jewellery normally so it’s been a whole new learning curve for him. We’ve been sorting out our centre pieces, we bought some mirror plates from Sell & Seek and then we went to Ikea to buy some different sized wine glasses. I also ordered some small silk sunflowers and candles from eBay.  We have wedding stuff everywhere in the house! I’m not going to know what to do with all the space I’m going to regain after the wedding!

Hen party was amazing - cocktail making and a night out in Manchester. The coach didn’t turn up so that was a bit of drama in the morning but the cocktail making and the hotel and night out more than made up for it. My girls all bought me little presents too which made me feel really loved. James has had his stag do - 2 nights and did go-karting outside which he loved because it had just rained so they were slipping and sliding all over the spot. Nothing more embarrassing than a Minion onesie  - which I’ve now claimed for myself. 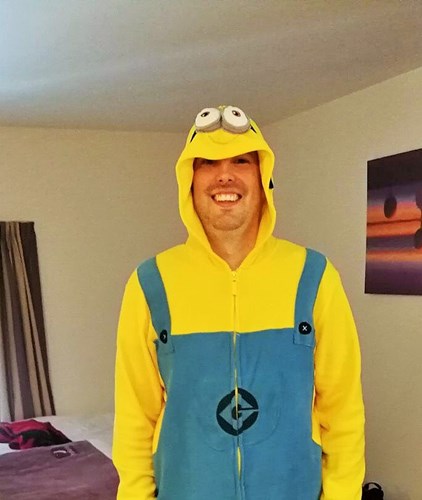 Less than a month to go!

James’ Mum has some pearls which belonged to her Mum, so she has given me some to make into a pendant and earrings.  Jo at the Silverforge in Milnthorpe  has sent through a design that I love. The checklist is getting smaller, but just one or two things left …

We had our 2-week appointment at Lancaster House with Lauren and Clare – they were brilliant and assured us that they have everything in hand! Three years of planning, lots of fun, friendships and happy times and the adventure is only about to begin. See you on the other side! If you are planning a wedding and would like to chat through your plans, Lauren, Clare and Claire, our Wedding & Events team, are available and love to talk weddings. Give them a call on 01524 844822 or visit our weddings page here